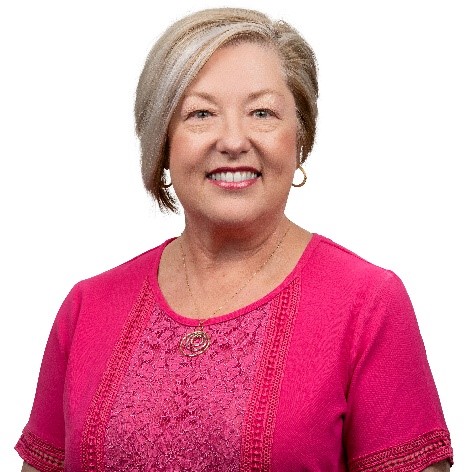 For those who have not met me yet, it’s my privilege to lead the Livestock and Plant Biosecurity and Animal Welfare teams in the Territory. I’m a country girl at heart, having grown up on a cattle and mixed horticulture farm in Mt Larcom, Central Queensland. My childhood was full of picking, packing, herding, branding, spraying and hoping for rain. My family are proud farming pioneers having descended from good first fleet convict and migrant stock!

My 35 year career in the NT Public sector has been extremely rewarding with roles in development focused areas of government, utilities, land development, major projects, investment attraction, tourism, parks and wildlife, sport and the arts. I have a genuine desire to see Aboriginal Territorians participating in the economy having spent many years in regional and Indigenous economic development.

It will be no surprise to many of you when I say that the biosecurity landscape has shifted significantly over the past 10 years and even more so in the last 2 years. In the Territory we have had a succession of emergency responses with many of you familiar with the most recent successful eradication of banana freckle, cucumber green mottle mosaic virus and citrus canker. These responses were large and required enormous collaborative effort from government and industry. Their success is a credit to all involved.

I guess what we don’t hear much about is the cumulative burden of each of these new biosecurity threats and the impact they have on industry and profitability. This is very much at the forefront of my team’s minds as they work to support industry to manage each new pest and disease incursion on top of the last one! Over the past twelve months the following have been detected in the plant world– with no clear and available treatment options:

Each new incursion means that industry are faced with new management regimes and growing challenges. My Plant Biosecurity team, under the dynamic leadership of Chief Plant Health Officer, Dr Anne Walters, are working hard to support industry with research on natural predators which may be able to keep the number and impact of these pests to a minimum while chemical treatments are also scoped.

Last year the Livestock Biosecurity team were alerted by the Department of Health that a lady had sadly passed away from Japanese Encephalitis (JE) on the Tiwi Islands. The team at the Berrimah Veterinary Laboratory sprang into action and worked on their testing proficiency to allow us to do the testing for JE at Berrimah Farm Science Precinct. Increased surveillance and diagnostic work has been carried out and the recent confirmation of JE in the West Daly region means that all Territorians should be vigilant regarding mosquito bites – cover up and spray on personal insect repellent! Less than 1% of people infected with JE develop clinical illness, but if you have symptoms such as headache, high fever, neck or back stiffness and vomiting please see your doctor.

On 3 March this year the Indonesian Government notified the World Organisation for Animal Health of the detection of lumpy skin disease (LSD) in villages in Riau Province in Northern Sumatra. LSD is a serious threat to the northern cattle industry, the buffalo industry and to all cattle and dairy operations across Australia. LSD is a viral disease primarily spread by biting flies, mosquitoes and possibly ticks. It may also be transmitted by nose to nose contact or drinking from troughs and through contaminated products and equipment. LSD has spread quickly throughout Asia, having originated in Africa.

Cattle, water buffalo and banteng may be infected with the following symptoms: fever, depression, tiredness, skin nodules which are 0.5 to 5cm round, firm and slightly raised, found on the head, neck, limbs, udder and under the tail area, may become scabby, ulcerated and infected, can cause severe pain and inflammation. Animals may go off their feed and some may die. Any case of skin lumps and scabs should be investigated thoroughly by a veterinarian to rule out LSD. If you see anything unusual or suspiciously like LSD please call the emergency animal disease hotline on 1800 675 888.

This is a huge challenge for the Northern Territory, being on the front line of biosecurity for Australia. Our amazing Chief Veterinary Officer, Dr Sue Fitzpatrick has moved quickly and we have established a LSD Stakeholder Group to keep key industry partners informed as well as developing a plan for collaborative work with the Australian Government and industry to increase surveillance and preparedness. There is much to do and we will need your support to help us to detect this threat as soon as it appears on our shores and stamp it out quickly. This will buy us time to develop an Australian quality vaccine and commence vaccination of all NT cattle, which will have its own logistical challenges. Vaccines that are available overseas have many limitations and the development of an Australian mRNA vaccine is under active consideration.

The impact on the live cattle trade and interstate movement of cattle will be immediate if LSD is detected in the Northern Territory. This is a serious threat and we need all hands on deck to try to detect and manage this disease.

Minister Manison recently announced a new allocation of nearly $2 million for biosecurity in the 2022/23 budget. This is most welcome and appreciated in tight fiscal times. There will be more announcements about where this budget will be deployed shortly and I’m sure you will agree that it’s very timely, given the challenges outlined above.

On the Berrimah Farm Science Precinct development front, we were delighted to open our new Molecular Diagnostics Laboratory last year. With a level three biosecurity containment laboratory this will be a huge asset to our industry sectors going forward. We have one more building to go and that will complete the $44 million worth of new facilities, a really strategic investment! The last building will house new laboratories for plant pathology, entomology, water chemistry, virology and will have an eDNA laboratory. We are anticipating a huge open day when all the laboratories are completed…will keep you posted.

So thanks for your ongoing support in biosecurity and I look forward to continuing to put my shoulder to the wheel with my fabulous professional and dedicated team to serve the agribusiness and aquaculture industries in the Territory. 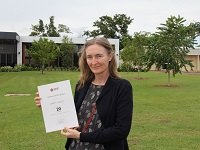 The award recognises the contribution of an individual in elevating the visibility and importance of Australian women receiving equitable access to higher levels of leadership across all industry and all forms of organisation.

Supporting the livestock industry at the NTCA conference

It was great to work with local businesses and producers that attended the Northern Territory Cattlemen’s Association industry conference to make sure they have the support they need to protect and grow the industry. 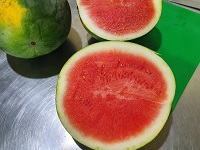 The Territory’s melon industry contributes to more than 20 percent of Australia’s production and around 75,000 tonnes of melons are due to be picked locally in the coming months. 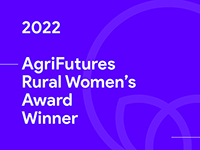 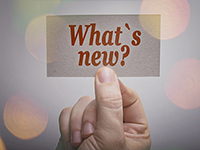 Amendments to the Pastoral Land Act 1992

The Pastoral Land Act 1992 was recently amended to streamline and improve regulatory processes for Government and industry alike. 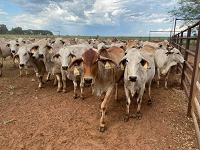 Selected Brahman and Composite scanning and end of mating

The Selected Brahman and Composite 3 month controlled mating has come to an end at the Department of Industry, Tourism and Trade’s Douglas Daly Research Farm. Bulls were removed from the paddock and cows were pregnancy tested and ovarian scanned if not pregnant. 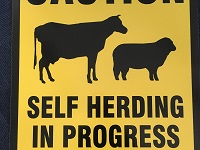 Self Herding is the brain child of Bruce Maynard and Dr Dean Revell. It is based on changing cattle behaviour and the way they interact with humans. The overall aim is to make stock management, with minimal stress and reduced effort. That can include encouraging cattle to graze new areas, helping them quickly become familiar with new water points and reducing stress during yarding and trucking. 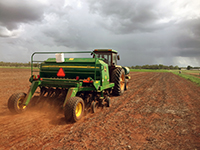 The work of the Katherine Research Station (KRS) team was in the spotlight in February as part of a ministerial visit to the farm.

From 2019-2021, a project was undertaken at Berrimah Farm Science Precinct to determine how honey bees introduce Cucumber green mottle mosaic virus (CGMMV) into healthy cucurbit plants, and then developed recommendations to manage the transmission of this virus by honey bees. 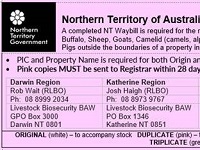 Have you submitted your pink copies?

Have you sent your PINK copies in to your Regional Livestock Biosecurity Officer recently? 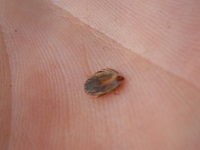 Tick fever within the Tick Zone

Tick fever is a disease caused by a bacteria carried by cattle ticks and spread to cattle through ticks feeding on cattle. All types of cattle can be affected but European breeds or those coming from ‘tick-free’ areas are more susceptible. Local Brahman-breed cattle are generally affected less. 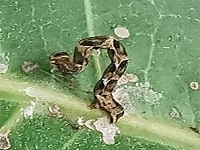 Mango shoot looper (MSL) is an invasive pest which has been found in Northern Territory following detections in Queensland in late 2021. This biosecurity threat affects production but not market access for the Northern Territory mango industry. 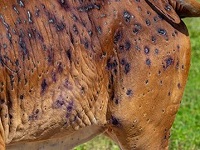 Lumpy skin disease (LSD) has recently been detected in countries close to Australia. LSD has never occurred in Australia, but the Department of Industry, Tourism and Trade’s biosecurity team is increasing surveillance and preparedness measures, to address this emerging threat. 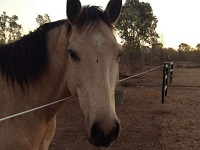 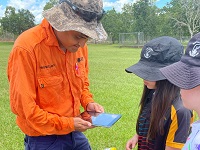 Teaching students the import-ANTS of biosecurity!

As part of a pilot educational and awareness activity, National Browsing Ant Eradication Program NT (NBAEP NT) staff within Department of Industry, Tourism and Trade assisted Year 5 and 6’s to conduct surveillance in their schoolyard to learn about collecting, analysing and using data to make decisions about biosecurity. 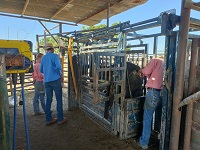 Water Supplementation in the NT

Two new producer demonstration sites showcasing supplementation of phosphorus via water medication have been established in the Northern Territory, and the first wet-season data has now been collected. 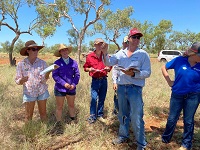 The popular Rangeland Management Courses are underway for 2022

Money doesn’t grow on trees, but it does grow on grass. Maintaining healthy rangelands is vital to a productive pasture and cattle herd in the Northern Territory, and what better way to spread the word than through DITT’s on-station Rangeland Management Course, which has proven to be a success amongst NT ringers.

More than $2.5 million has been paid to NT producers for the implementation of new water infrastructure projects as part of the Australian Governments On-farm Emergency Water Infrastructure Rebate Scheme.

Climate Services for Agriculture: a new website for Territory pastoralists

There is a new climate website for agriculture and it has relevant, easy-to-read rainfall forecasts for the northern beef industry. A unique feature is the Future Climate scenarios with likely changes in rainfall, temperature and heatwaves under a variety of climate change forecasts. 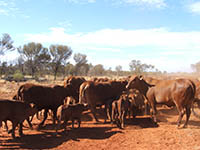 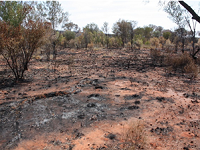 After 2 very wet, consecutive summers in Central Australia, there will be a higher risk of wildfire in the coming months with some fires already having occurred during March. There are also burning opportunities and a chance to reduce fuel loads and open up shrubby country. Some people gained experience with wildfire during previous fire seasons however, they were 10 and 20 years ago. It is timely for all land managers to revisit producers lived experience with fire and review the research that has been undertaken in the region. 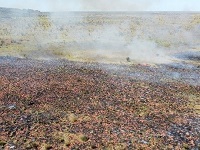 Time to connect with the team at Bushfires NT

The past 2 years have seen wonderful growth across much of Central Australia. Already, land managers are talking about the impending bushfire season! It is timely for all land managers to review their fire management plans and engage with Bushfires NT as there are opportunities for reducing wildfire risk with strategic activities in the coming months.

No articles matching your selected filters were found.