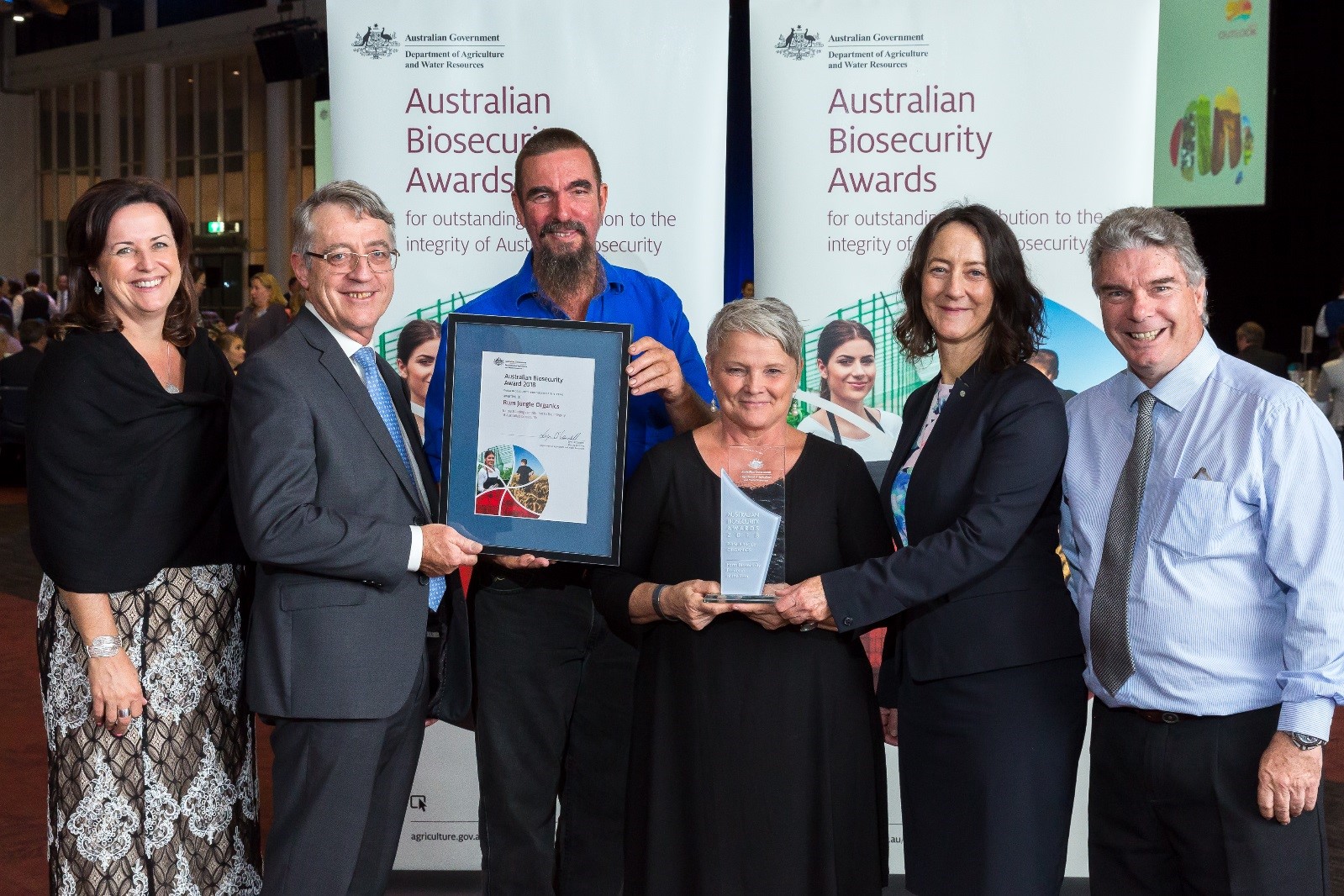 The Department of Primary Industry and Resources Plant Biosecurity Division nominated Rum Jungle in recognition of the extraordinary lengths they had taken to implement the strongest possible biosecurity practices on their property.

Chief Plant Health Officer Sarah Corcoran said the owners, Alan Petersen and Julie-Ann Murphy, had implemented some of the most comprehensive biosecurity measures in the region including having only one entry and exit point to the property, restricting all vehicular travel on the property to a farm dedicated vehicle, isolating new plants from the rest of the crop and carefully monitoring them, and maintaining visitor records in case future investigation is required.

“They treat their biosecurity plan as a living document, reviewing and updating it as necessary to minimise the risk of endemic and exotic pests and diseases getting onto their property,” Ms Corcoran said. “The biosecurity measures they’ve put in place not only protect their own livelihood from pest and disease, but also the broader industry, which enhances the reputation of the Territory and Australia as producers of fresh, high quality produce.

Rum Jungle Organics owner Julie-Anne Murphy said they have always made on-farm biosecurity a priority as they are an organic farm.  “We farm regeneratively with an emphasis on plant and soil health and a dynamic biosecurity plan to minimize risks,” Ms Murphy said.

“During the Banana Freckle eradication we worked closely with the DPIR and built very strong working relationships with the National Banana Freckle Eradication Program within the department’s Plant Biosecurity Branch and we thank them for their support and nomination.

“We are very proud to represent both organic farming and the NT and hope our award will place the spotlight on the importance of on-farm, regional and national biosecurity, and regenerative organic farming.”

Dr Rosie Godwin, Research and Development Manager Australian Banana Growers Council (ABGC), visited Rum Jungle Organics while in Darwin recently and was impressed by the biosecurity measures implemented to minimise endemic and exotic pest incursions. “Exclusion as the first line of defence and implementation of effective on-farm biosecurity measures are key to keeping your farm free of pests and diseases,” Dr Godwin said.

Dr Godwin was given a copy of the comprehensive biosecurity plan Rum Jungle Organics has implemented to use as a guide to what other property owners can consider to minimise possible risks. Dr Godwin also shared information with Alan and Julie-Ann about how ABGC can assist banana growers.