During October to December 2017, 37 livestock disease investigations were conducted to rule out emergency diseases or investigate suspect notifiable diseases across the Northern Territory (NT). Figure 1 shows the number of investigations by species of livestock.

Figure 16. Livestock disease investigations by species for October to December 2017

A herd of 220 Brahman-cross cattle on a small property outside Darwin were investigated in November after the owner of the property reported unusual signs in the herd.

Affected cattle were initially observed with signs of salivation, anorexia, a stiff hind-limb gait and glazed and red eyes. Over a period of 24 hours, the affected cattle began to lie down, and were unable to get back up. Over a period of eight days, one cow had died, four steers had been euthanized and one steer had recovered, despite all receiving anti-inflammatory treatments.

The cattle had been in the same paddock for the previous seven months. They were generally in poor condition despite having access to supplemental grass hay for approximately one month.

Post mortem examination of a three-year-old cow was unremarkable except for bone fragments in the reticulum and green ironwood leaves in rumen content. The cow was in poor body condition. Laboratory tests on tissues samples did not reveal any histological lesions, including no findings suggestive of transmissible spongiform encephalopathy (TSE) detected at the brain sites specified in the Australian and New Zealand Standard Diagnostic Protocols — TSEs.

The main effect of ironwood is a cardiac arrhythmia (abnormal heart rhythm), which leads to severe debilitation. In some cases, the degeneration of the cardiac muscle is observed during laboratory examination and testing. This was not evident in this case.

The ironwood tree (Erythrophleum chlorostachys) is endemic in the northern region of the Northern Territory. Cattle bred in endemic areas will not usually consume the plant. The leaves of the ironwood treeare highly toxic when ingested. As few as a couple of leaves are known to be lethal to cattle. The toxic agents are diterpenoid alkaloids. Young leaves of new plants are very attractive to hungry and newly introduced grazing stock.

Given the dry time of the year and scarce availability of feed, it is likely that the hungry cattle found the green ironwood plants palatable in this case.

An outbreak of necrotising fasciitis in racing greyhounds in Darwin occurred over a five-day period in October.

Four dogs presented to veterinary clinics with signs of lethargy, depression, elevated temperature, lameness and localised swelling of the forelimb or hind-limb, and intense pain disproportionate to the wound. Each infection started with a small skin lesion and progressed to a large area of necrosis (dead cells) and ulceration within a few hours. Another case presented in Darwin in November.

In all cases, affected dogs were euthanized and testing was conducted by Berrimah Veterinary Laboratories.

With varying levels of severity, further examination showed haemorrhage, oedema (swelling) and necrosis of the limbs, ecchymotic haemorrhage of lymph nodes and generalised congestion of tissues.

Four greyhounds were diagnosed with severe necrohaemorrhagic fasciitis and one with streptococcal toxic shock syndrome.

Death was reported to occur in another five greyhounds in Darwin without veterinary investigation.

Necrotising fasciitis is a rare disease in dogs caused by S. canis. The condition appears suddenly and progresses rapidly, leading to systemic illness, toxic shock and death if left untreated. It destroys the skin, fat and underlying muscle tissues. It may present in the form of pneumonia. S. canis is considered normal flora in dogs. The change to an aggressive pathogenic type that is invasive is poorly understood, but may be due to acquired virulence factors in a particular clone.

Bacteria usually enters through the skin and can be spread by contact with infected dogs or exposure in a contaminated environment. Stress associated with travelling long distances may decrease an animal’s resistance to the disease.

Veterinary officers from the Department of Primary Industry and Resources (DPIR) inspected the kennels at the site and provided advice on biosecurity and disease control to dog owners, trainers and veterinarians. Two greyhound race meetings and one trial were suspended during this time to reassess biosecurity measures. Races resumed one week after the last case was reported in October.

Feral pig hunting is popular in the Northern Territory

You can hunt feral pigs on public land as long as you carry out best practice and adhere to the relevant laws of the Northern Territory (NT).

Being a responsible feral pig hunter:

Be aware of your ethical responsibilities by ensuring that humane methods are utilised to kill feral pigs and that they are not subjected to unnecessary pain or suffering.

Dogs are permitted to be used when hunting feral pigs in the NT, however strict regulations are in place under the NT Animal Welfare Act (as in force April 2017) and the National Model Code of Practice for the Welfare of Animals: Feral Livestock Animals to ensure the humane treatment of feral pigs and the welfare of hunting dogs are enforced.

Heavy penalties apply for breaches of animal cruelty when undertaking an activity that involves hunting. Penalties may also apply if you don’t have the necessary permits to hunt on certain lands within the Northern Territory, including on Crown land or reserves managed by the Parks and Wildlife Commission of the NT or Parks Australia.

Additional information on feral pig hunting in the NT and how to obtain a pig hunting permit can be found on the NT Government website.

Managing the risk of disease

Feral pigs can host a number of diseases and parasites that may be transmitted to other animals and humans. Hunting feral pigs carries a high risk for contracting these potentially debilitating diseases, which have serious long-term health implications.  Ensure that you take steps to protect the health of your dogs and yourself.

Butchering:  You should wear appropriate PPE when butchering a feral pig.  This includes gloves and footwear.  Worms that you may see are not important for human health and are neutralised by proper cooking.  However any abscesses found are likely to contain harmful bacteria and should result in the discard of the pig carcase.  Many diseases do not show any signs in the pig carcase.

Some important shared diseases in pigs and people include:

Brucellosis is a notifiable animal disease in the Northern Territory. There is a legal obligation to notify your government veterinary officer if you know or suspect that an animal has this disease. 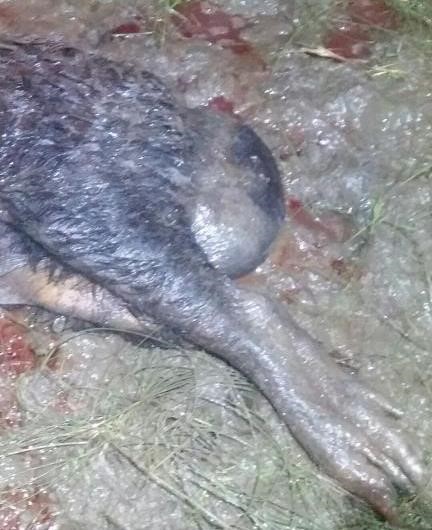 Leptospirosis-A bacterial disease that can cause high temperatures, kidney disease, jaundice and meningitis (inflammation of the lining of the brain) which can be fatal. Leptospirosis is found in animal tissue, urine and commonly in swamp water. It enters the body through cuts and abrasions and contact with mucus membrane lining of the nose mouth and eyes.

Melioidosis – A bacterial disease. Commonly affected livestock include goats, pigs and camels. This disease has potential to be passed on to humans through contact with infected animals or soil.

Swine Influenza - Swine influenza is a highly contagious, rapid onset, respiratory disease of pigs. Pigs contract this disease through close contact with infected pigs. Swine influenza viruses are normally restricted to pigs, however occasionally a human may become infected. It is known that pigs have a potential to mix different strains of influenza viruses together to produce new strains that may have the potential to infect humans. In 2009 there was an outbreak in several pig herds in Australia that was quickly eradicated. Signs of pigs infected with Swine Influenza include:

As well as diseases endemic to Australia, feral pigs have the potential to harbour and spread a number of exotic diseases not known to occur in Australia. This would have a major impact on international trade, the Australian livestock industry and our way of life.

These notifiable diseases include:

Foot-and-mouth disease – a highly contagious viral infection of domestic and wild cloven-hooved animals such as pigs, cattle, buffalo, goats and sheep. Symptoms found in animals include blisters and erosions in the mouth and on the feet, severe sickness and lameness.

Rabies –Rabies causes inflammation of the brain and spinal cord (encephalitis) resulting in death.  The main symptoms include behavioural changes, varying neurological signs, progressive paralysis, coma and death in all species.  This disease is also fatal in humans.

Swine vesicular disease – a highly contagious viral disease of pigs that is indistinguishable from foot and mouth disease. Symptoms include blisters and erosions in the mouth and feet, severe sickness and lameness.

Surra -a disease caused by the blood-borne parasite Trypanosoma evansi that is transmitted by biting flies. It can become established in a variety of animals including cattle, horses, pigs and dogs. Typical signs include chronic wasting, weakness, pale gums and swelling of the legs and brisket. This disease is often fatal. Surra would be virtually impossible to eradicate if it became established in Australia and is present in countries as close to Australia as Indonesia, Papua New Guinea and Timor.

Precautions to prevent the spread of infections: 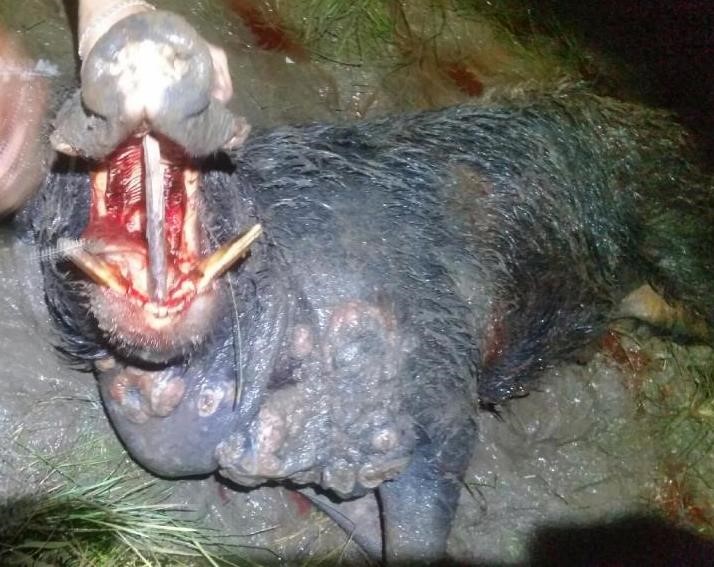 Feral pigs are a high risk for spreading diseases to humans, hunting dogs and other animals.  All diseases shared with pigs are serious for people and must be diagnosed and treated by your doctor who must also notify the health authorities in case further action is required for your benefit.

If you suspect a pig disease of concern contact your Regional Veterinary Officer: