Testing the Longevity of CGMMV in NT Soils 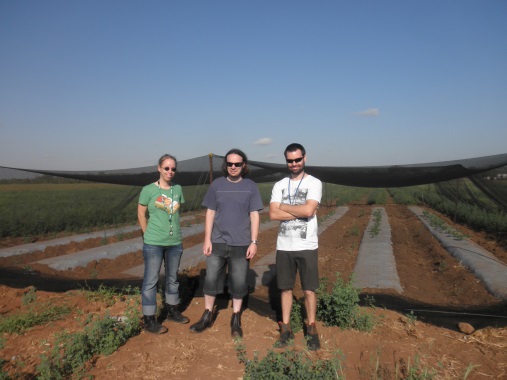 In September 2014, Cucumber Green Mottle Mosaic Virus (CGMMV), a virus of cucurbits (including melons), was first detected in watermelon crops in the Venn near Katherine and subsequently found on other properties near Katherine, Ti Tree and Darwin. The response to these detections was a two-year quarantine period on all 25 Infected Premises (IPs) on the growing of melons and other cucurbits. The virus was mainly detected in host crops, but it was also found in a range of other plants, mostly weeds, on infected and adjacent properties. The virus can remain viable in soils for a number of months.

Department of Primary Industry and Fisheries (DPIF) is conducting research to determine the longevity of CGMMV in soils where host plants have been removed. Research conducted overseas has suggested CGMMV may remain viable in host free soils for a period of 6-8 months.

A research project using glasshouse trials at Berrimah Farm and field trials on four IPs commenced in August 2015. The four infected premises include one property in Darwin, two properties in Katherine and one property near Ti-Tree. These sites were selected based on geographic location and differences in soils, temperatures and daylight period.  At each site, eighty soil samples were collected from a GPS location where a host plant had tested positive to CGMMV. The samples were taken to Berrimah Farm for pot trials where susceptible watermelon/cucumber plants were planted into the contaminated soil. Using normal crop practices, eighty susceptible watermelon/cucumber plants were also planted at each site, within 10-15cm of where the soil samples were taken.

Plants from both trials were left for a period of 5-6 weeks, after which point they were bulk sampled and tested for CGMMV. Results suggest that the virus is still present in three of the tested properties, but its viability is not yet determined. This will be explored further in pot trials to be conducted later this year.

The DPIF Plant Pathology team would like to thank the farmers for allowing us to use land to conduct field trials and to Greg Owens (NT Farmers Association), Northern Territory Quarantine and DPIF staff for their support and help throughout these trials.