Industrial hemp: a future prospect for the NT?

Industrial hemp legislation is currently being drafted to enable a new commodity to establish and operate in the NT. If the legislation passes, and following the creation of supporting regulation. The Department of Primary Industry and Resources (DPIR) intends to work with primary producers to help familiarise them with the crop, learn from others in the developing industry, and determine if there is an opportunity for them in that space. 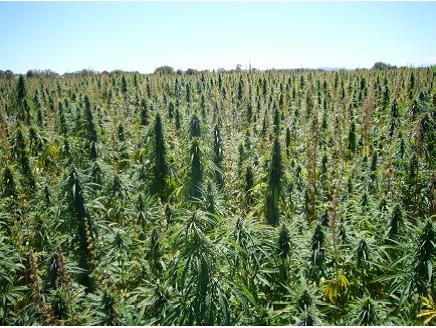 The NT is currently drafting legislation to allow the lawful development of an industrial hemp industry based on the cultivation and processing of low tetrahydrocannabinol (THC) Cannabis spp. (≤ 1%) to be used for food, fibre and other industrial end uses. This specifically will exclude the extraction or diversion of any cannabinoids for medicinal purposes. All other State and Territory Governments in Australia have already established legalisation and licensing arrangements to accommodate industrial hemp production. The NT remains the only jurisdiction where industrial hemp cannot be legally grown – but that will change in 2019.

In most Australian and international jurisdictions the level of THC in industrial hemp is typically set at thresholds of <1% of dry weight, while the THC level in narcotic/medicinal cannabis varies from generally from 3% to in excess of 15%. Low THC varieties are commonly referred to as hemp, industrial hemp or industrial cannabis. From November 2017, legislative changes enabled industrial hemp produce derived from the seed e.g. oil, flour, pressed cake or whole grain etc., to be legally consumed as food in Australia. The NT Misuse of Drugs Act has been amended to accommodate the changes.

Until such legislation is passed, possession of cannabis material (seed, leaf, flower heads, resin etc.), is illegal, and constitutes a criminal offence.

So hold out and watch for further notice of legislative and regulatory development in 2019.

Not to be confused with industrial hemp, medicinal cannabis can now be propagated in Australia under Australian Government law. Under the auspices of the Narcotic Drugs Amendment Bill 2016, the Australian Government has set the ‘authorising environment’ for producing medicinal cannabis in Australia. Persons authorised under this Act can potentially grow high or low THC varieties and extract the respective cannabinoids for commercial use in therapeutic products. All past inconsistencies with various State and Territory legislation have been resolved.

Industrial hemp is grown for fibres found on its stalk and for seed and/or grain. Hemp fibre has typically been used for industrial purposes, such as the manufacturing of textiles, ropes and lines, paper and building materials and its grain as a highly nutritious food source, either as a whole grain, an emulsified cake, flour, or pressed oil. Other value-added products include health lotions, sunscreens, shampoos, soaps, beer, biofuels, animal bedding, stock feed, insulation and car mouldings.

Food produced from industrial hemp does not have any psychotropic properties.

Certain plant compounds may also have application for non-therapeutic uses, an example being potential biocides or carriers for aromatic fragrances (such as with air fresheners).

Industrial hemp as a proliferator of illicit crops?

Police forces in Australia and internationally have previously expressed concern that high THC lines of cannabis, that is illicit cannabis, could cross fertilise legitimate hemp crops, creating increased THC levels in subsequent crops produced from that seed. It is important to understand that this is not likely to occur as management strategies for illicit narcotic crops run counter to management strategies for legitimate hemp crops.

Where is the opportunity for the NT?

A literature review of the prospects for industrial hemp in the NT was undertaken by the department in 2015. Subsequent to this, industrial hemp has been trialled under strict licences in the NT. Further work is needed to determine varieties, rotations and fine-tune the agronomy and explore compatible agro chemicals. DPIR agronomists have looked at the performance of existing varieties and are keen to work with interested producers in future farming systems.

Small plot experimental trials were conducted by DPIR in 2016 with low THC hemp varieties at Katherine Research Station. The results indicated that one variety tested was able to realise comparative yields of between 2.0 and 4.8 t/ha.  THC levels in the trials were < 1% which is ideal. Hemp grain is presently a lucrative commodity with a farm-gate price of approximately $3,000 per tonne. The crop length (approximately 90 days), may also position it well either as a break-crop or for a double-crop cash crop. The trials provide an indication that hemp grain production may be a viable proposition as a dry season crop but further work is required on growth potential at different times of year in the NT.

The industrial hemp growing sector is in its infancy in Australia and consequently needs a reliable source of future seed supply of accredited grain or fibre varieties. A seed production system based over the Top End dry season, or the central Australian cool season (May to October), may be a commercial idea worth exploring. Seed produced from trial mentioned above was not fully tested for viability. Further work is required to confirm the seed production potential for NT. 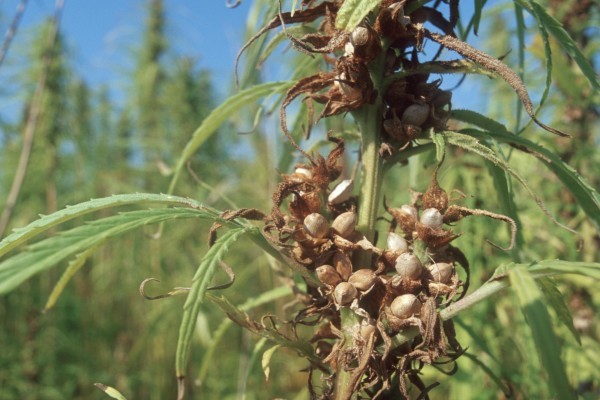 Above: Seed development on  a hemp plant causes THC production to cease.