30 Years with DPIR for Jack Wheeler

For recognition of 30 years of service to the Department of Primary Industry and Resources, Jack Wheeler has received a milestone award. His three decades within the department have not been without adventure. Jack joined the department in February 1986 as a Stock Inspector and his first years were spent in southwest Arnhem Land, then at Victoria River Downs. Jack reflects on his early career: 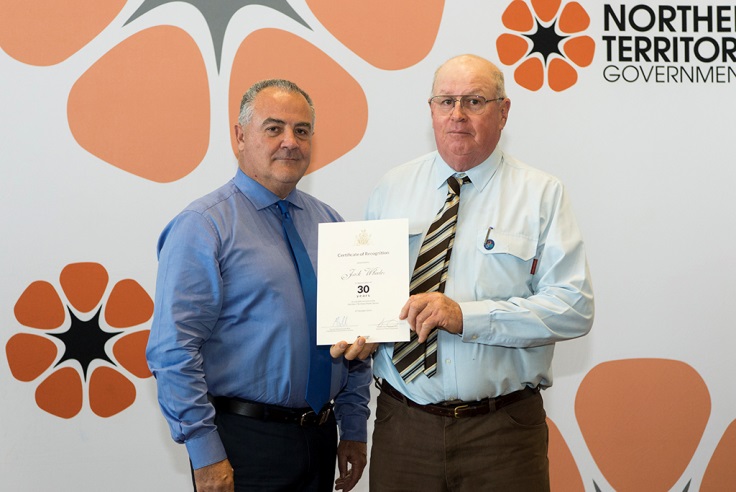 “Life as a Stock Inspector certainly had its moments but we were a close knit group and one didn’t need to look far for support. Under the guidance of Dave Napier, Keven Paterson, Peter Flanagan, Tony Cooley, Mick Geraghty (The Fox) and too many other fine gentlemen to mention, they made sure that the department’s name was never used in vain because of them.”

Then in August 1990 Jack started as the Farm Manager at Katherine Research Station and had a very steep learning curve:

“Under the watchful eye of Tom Stockwell and Peter Ridley, I learnt things like shopfront window diplomacy, and on a serious note though just how important animal and plant research and development is to the industry.”

Highlights for Jack since being Farm Manager have been Peter Ridley’s Meeting Market Specifications, the Broadacre Cotton trial, Senepol Cross Breeding, the Critical Weaning Weight trial and watching 30 hectares of grain sorghum reduced to stubble under a screeching, whirling, mass of cockatoos. “I have enjoyed my time and the company of so many generous friends and colleagues, not only in the job, but the industry as well.”