Glen Oliver, Horticultural Technical Officer, Callen Thompson, Agronomist and Stuart Smith, Manager of the Central Australian Horticultural Development Project, attended the Irrigation Australia International Conference and Exhibition from the 24-26 May in Melbourne. There were a fascinating array of speakers and trade exhibitors. Some of the highlights from the speakers that have lessons for Central Australian growers include:

Graeme Hawke from the Bureau of Meteorology spoke about the way the amount of data available to them has increased phenomenally over the last couple of years and this trend will continue. The Japanese have a geostationary satellite that monitors their longitude which includes Australia. This satellite collects huge amounts of data, and, luckily for Australia, they share the data for free. The computing power now available to handle the data has gone up to 1600 teraflops, leading to better modelling and predictions, which Graeme suggests contributes $1 billion to agribusiness through better seasonal forecasting.

James Hills from Tasmanian Institute of Agriculture has found that on dairy farms in Tasmania, the irrigation cost per megalitre applied varied by a factor of five from lowest to highest. The biggest problems were irrigation design errors (wrong pump not matching pipe diameters etc.) Chris Thompson, a consultant from Tasmania, estimated that centre pivots in that state (there are about 2000) work at about 60% efficiency, and the 40% difference is mostly runoff. Getting the infiltration rate matching the application rate of the sprinklers and correcting drainage issues at the start is the key to improving efficiency according to Chris, but designers were not doing much of this type of work. This was a handy reminder for growers to check and optimise their system designs.

For an environment similar to Central Australia, Tony Wheeler, Managing Director of Envirogrower, told his story of working in the United Arab Emirates to green the desert for a wildlife project to restore the habitat of a native bustard (bush turkey). They were operating in 50+ degree conditions to attempt to grow desert plants using plastic tube with nano-holes, that, under pressure (0.2-0.5 bar), exuded water into the sand. Because the holes were so small (50-900 nm) it was claimed that they did not block with sand, because the sand was so much bigger than the hole. The soils they were working with were white sands like you see on Laurence of Arabia-type movies with minimal water holding capacity. All the water was from wells. The tube delivered 2-4L/m/day, and up to 6-7L/m/day at higher pressure. It ran 24 hours a day and was successful in getting plants growing in the desert. The bustards, which were bred in captivity, were returned to the desert much to the delight of the Arabs. The tube cost 75 cents/metre wholesale, and came in 500m rolls. This type of system might work in Central Australia using high calcium water because it operates 24 hours a day, so the water is always moving out of the tube.

Phillip Glyde, the new CEO of the Murray Darling Basin Authority, spoke about his job to implement the Murray Darling Basin Plan. This is a tough job, as no one amongst the stakeholders is 100% happy with it. The area has 23 river valleys, 80% in the Murray and 20% in the Darling. It is 14% of Australia’s land mass and contains two million people, with an extra million in Adelaide relying on the water. It comprises 40 Indigenous nations and four states and one territory. Between 35 and 40% of Australia’s gross value of agricultural production comes from the area, 65% of this from irrigated farms. It has 30,000 wetlands and 16 Ramsar sites (wetlands protected under the Ramsar Convention).

The problems in the basin are over-allocation, acidification, salinity and algal blooms. Different jurisdictions have been fighting over water in the basin for over 100 years. Their target is to recover 2750 GL for the environment. 1951 GL has been recovered so far, and 1163 GL was purchased. Supply measures saved 650 GL and efficiency measures, 450 GL. There are more agricultural enterprises going in, almonds in particular. They are doing some environmental watering as well, a new phenomenon. Overall the plan is adaptive and they are meeting milestones in Australia’s largest food bowl.

Richard Stirzaker from CSIRO gave an excellent overview of soil water monitoring. The title of his talk was “What are we getting wrong?” Richard has been working all his life on soil moisture monitoring with the aim of making it both useful and affordable for growers. He told the story of the census results for soil moisture monitoring over the past decade or so. About 6,000 irrigators used soil moisture probes in 2003. From 2009-2014, use of probes dropped from 6,000 to 2,000. Farmers have been abandoning them, and most use calendar scheduling, possibly because of the complexity of data that commercially available probes generate. Richard now manufactures probes that have a traffic light system that shows a farmer the moisture level at three depths, green for wet and red for dry. This has been used successfully both in Africa and Australia, and is proving popular with growers. 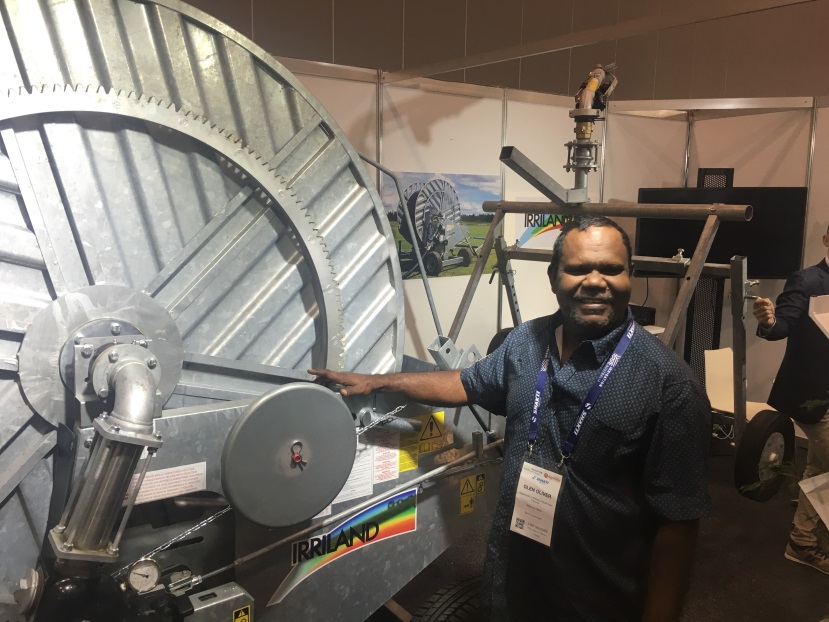 (Above) Glen with his new toy

Finally, Glen and Stuart went to the Werribee wastewater treatment plant on Thursday for a study tour. This plant started in the 1880s when Melbourne relied on throwing night buckets into the Yarra River. This gave Melbourne the nickname ‘Smellbourne’ and was not great for prevention of cholera and typhoid, as people were still drinking out of the river. So a British and Australian engineer came up with a plan to move sewerage from Melbourne to Werribee, which is about 16m lower in elevation than the city. Back then the waste was simply piped out and onto the extensive farmland there, where is dried out and any diseases were chewed up by soil microbes. There used to be a town there. It was finally abandoned in the 1970s, but the buildings still remain and are used for film sets. 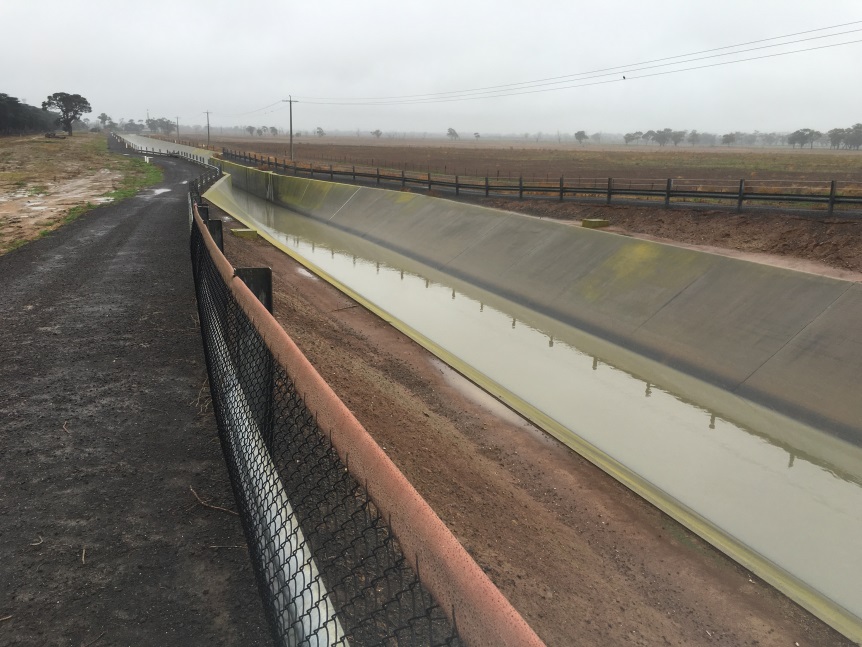 (Above) Channel that carries the raw waste to the ponds

Currently, the technology for treating waste is better. Sixty percent of Melbourne’s waste flows downhill until it gets to Hoppers Crossing where they smash it up and apply a bit more pressure so it makes it to Werribee. The smelly gas associated with the waste is piped off to generate power, so the open channel carrying the waste has little smell. It flows down the channel to a deep (8 m) anaerobic pond (it was covered with a white tarp) where the microbes start chewing through the waste. The gas generated from this pond also goes to the power plant. The water then goes to some shallow ponds (2 m) where the UV Light works on the microbes and solids settle out. After this is goes to an aeration pond which has pumps that spray the water through the air, in the presence of bacteria that convert Nitrate and Nitrite to Nitrogen gas. After this, most of the water enters Port Phillip Bay, which is very close. As the water goes through the treatments the bird life increases and birdwatchers pay to have access to the area. This is similar to Alice Springs, where our Ilparpa treatment facility has a plethora of bird activity.

Some recycled water goes back for gardens, toilet flushing and farmlands. It costs about $350 per ML for the end user. It is wholesaled by the water authority and retailed by another water body. A contractor grows crops on site. After 100 years or so of night soil going into the ground, many of the crops (e.g. corn) looked quite vigorous. In Alice Springs, some recycled water is used for irrigation and other use. We do not have a big bay to dispose of the water, so a proportion is being stored in an aquifer at AZRI for later use, an innovation that is the only one in Australia, and very rare on a global scale.

Growers interested in the conference outcomes should contact Stuart Smith at the Arid Zone Research Institute for further information on 0400 547 613. 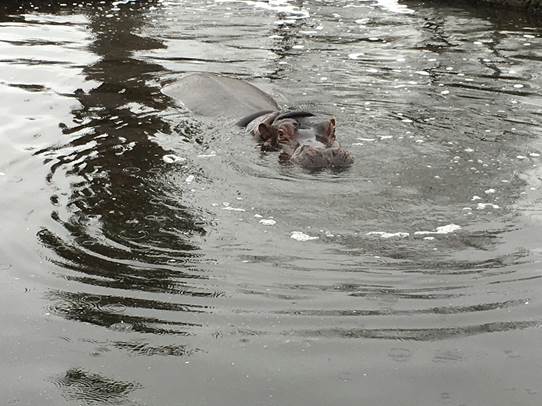 (Above) Not found at the Werribee wastewater treatment plant!