The pastoral industry is a major contributor to incomes in regional areas of the Territory. It also generates considerable flow‑on benefits to other industries, particularly transport and storage, business‑to‑business services and retail trade services. The pastoral industry contributed 65 per cent of the total value of Territory primary industry and fisheries production in 2018‑19 (Figure 3).

The value of the total interstate movements of Territory cattle in 2018‑19 was estimated at $544.7 million, up 76.9 per cent from 2017‑18 ($308 million). A total of 525,861 head of Territory cattle were sent interstate in 2018‑19, an 83.4 per cent increase over 2017‑18 (286,721). This increased turn‑off was due to destocking by several of the corporate pastoralists moving cattle to their Queensland properties or selling down to reduce numbers due to dry conditions in the Barkly and Victoria River District.

The economies of the major destination countries for live cattle exports are being impacted by the pandemic and the necessary protection measures are severely affecting their economic activity. This will affect household spending. As a result of the pandemic, the global economy is projected to contract sharply by ‑3 per cent in 2020, much worse than during the 2008‑09 financial crisis. In a baseline scenario, which assumes that the pandemic fades in the second half of 2020 and containment efforts can be gradually unwound, the global economy is projected to grow by 5.8 per cent in 2021 as economic activity normalises, helped by policy support.

Other livestock is a category of industries in the Territory that has historically included crocodiles, poultry, buffalo, horses, camels, deer, pigs and goats, exported overseas or sent to domestic markets. Crocodiles are the largest industry in this category. Premium grade crocodile skins are highly sought after in Japan, France, Italy and Asian countries. Second and third grade skins are also exported, although there is a growing domestic demand. The by‑products of flesh, feet, teeth and skulls are mainly sold domestically.

Total other livestock (crocodiles, buffalo, horses, camels, pigs, and goats) contributed 2.7 per cent to the total value of Territory primary industry and fisheries production in 2018‑19 (Figure 3).

For 2018‑19, the value of the Territory’s crocodile industry was estimated at $26.8 million. This accounted for 79.3 per cent of the total value of production of the other livestock industry sector.

Almost all production from Territory plant industry is sent interstate (for domestic consumption or to be exported). Less than 1 per cent of plant produce is exported directly from the Territory. Historically, this has involved mangoes, melons and pumpkins to Singapore and, most recently, woodchips to Japan. Field crops are mostly hay production for the cattle industry. In 2018‑19, the Territory accounted for 1.7 per cent of national horticulture production.

The main fruits produced in the Territory include mangoes, melons, and table grapes. Fruit production value in 2018‑19 increased an estimated 2.2 per cent to $185.2 million on 2017‑18 (Table 12). This was due to increases in the value for melon and other fruits, offset by a decline in mangoes. There was no production recorded for bananas and table grapes production value was consolidated with other fruits in 2018‑19.

Historically, Territory mixed farming has included seed production, sorghum, maize and other crops, such as sesame and soybeans. Hay and fodder production, used to supply the Territory cattle industry, accounted for 100 per cent of the total field crops production values in 2018‑19.

Mixed farming contributed over 3 per cent of the total value of Territory primary industry and fisheries production in 2018‑19 (Figure 3).

Local markets accounted for around $9.2 million of production in 2018‑19, mainly in the Darwin markets. Local farmers’ markets include Rapid Creek, Palmerston, Parap, Nightcliff and Mindil Beach.

There are more than 49,000 hectares under plantation forestry across the Territory.

Acacia (Acacia mangium) plantations on the Tiwi Islands are grown for paper pulp.

Tiwi plantations started to reach maturity in 2015 and trees continue to be harvested and sold into the international woodchip market (mainly Japan). In 2018‑19, Tiwi Plantations Corporation exported woodchips worth $10.6 million.

African mahogany is grown for high‑value timber in the Douglas‑Daly and Katherine regions. The trees have an expected rotation of between 18 and 25 years. These plantations are currently mid‑rotation and have been independently valued at $100 million standing value, that is, the current value of trees within the plantation that will yield saleable timber when harvested at maturity.

Indian sandalwood is grown for oil and pharmaceuticals in the Douglas‑Daly and Katherine regions. Sandalwood is the only plantation forestry in Australia routinely grown in a mixed species system and with irrigation. Still at the early rotation phase, Territory sandalwood plantations will not be harvested for more than a decade, when they are expected to go into the valuable international oils and pharmaceutical markets. A standing value is not currently available.

Most Territory seafood is transported interstate (to be either exported or consumed domestically). The value of Territory fisheries production for 2018‑19 was $119.8 million, an increase of 8.3 per cent compared to 2017‑18 (Table 13). This increase is attributed to a $15.8 million rise in aquaculture output.

This increase was offset by decreases in fish (wild‑stock catch), Territory crustaceans, molluscs and echinoderms and NPF crustaceans (Territory catch). In 2018‑19, fisheries contributed an estimated 9.6 per cent of the total value of Territory primary industry and fisheries production value (Figure 3).

The Northern Prawn Fleet Fishery management area is located off Australia’s northern coast from Cape York in Queensland to Cape Londonderry in Western Australia. There are 52 vessels licensed to operate within the fishery, which covers approximately 880,000 square kilometres of Australia’s northern waters. On average, the value of the NPF catch accounts for 40 per cent of the total value of Territory fisheries.

Within this fishery, arrangements exist between the Australian Government and governments of Western Australia, the Territory and Queensland, whereby the coastal waters of these states and territories are deemed part of the Australian Fishing Zone. The area of the fishery is sourced from the Northern Prawn Fishery Management Plan 1995 (17 October 2003 – amendments up to Northern Prawn Fishery Amendment Plan 2003 (No NPF 04)). The maritime zone boundaries shown on Figure 7 are sourced from the Australian Maritime Boundaries Information System 2001 (Version 1.1) (released October 2001). 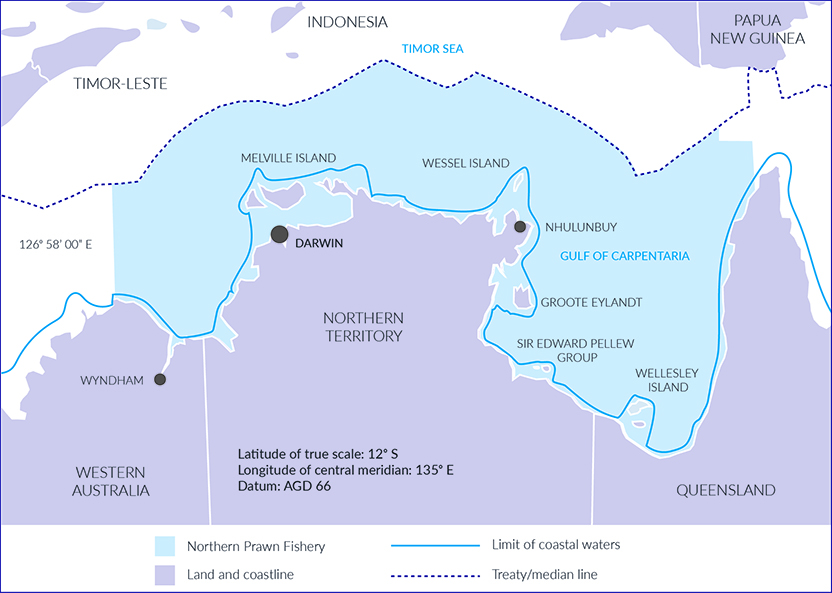