There was excitement in the air as Department of Industry, Tourism and Trade Rangeland Program Manager Dionne Walsh and Senior Livestock Scientist Kieren McCosker rumbled down the highway in late August in a ute loaded with crates of high tech wizardry.

With the help of the station staff at Rocklands, they put GPS tracking collars on 140 pregnant breeders and 20 steers to investigate:

This is important as many breeder paddocks in Northern Australia are too big and under-watered to achieve optimum productivity. Walking long distances out from water to feed late in the dry season erodes live weight gain and body condition in breeders. In turn, the negative impact of poor body condition on re-conception and calf survival rates further reduces productivity. Some producers believe that high rates of calf wastage (>20 per cent) in large poorly-watered paddocks may be caused by cows leaving newborn calves to return several kilometres back to water, increasing the risk of predator attacks or dehydration. These are the issues that the Paddock Power project is investigating.

The ultimate goal is to provide strong evidence to support investment decisions for developing new infrastructure, reduce rates of calf loss and increase the kilograms of beef produced. 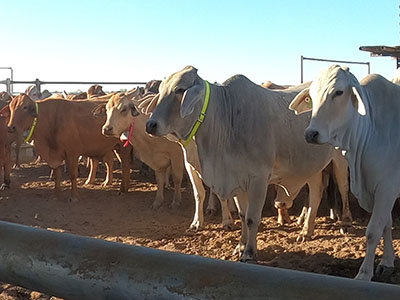 Above: Some of the pregnant cows fitted with GPS tracking collars at Rocklands.

We’re also looking for good quality animal performance data from stations across northern Australia – contact us to discuss how we can analyse your data to see what your calf loss rates and reproductive performance is in paddocks of different sizes and watered area.

Contact us to discuss how you can get involved:

Back to NT Rural Review - September 2020
Back to top
URL: https://industry.nt.gov.au/publications/primary-industry-publications/newsletters/regional-newsletters/rural-review/nt-rural-review-september-2020/paddock-power-gears-up-at-rocklands-station 19 August 2022, 12:56 am