Where does this summer fit in the long-term rainfall record?

The summer of 2020/2021 has seen pretty wonderful rainfall for most of Central Australia and it is a relief to see the landscape so green! Before we start to think this is ‘the new normal’, it is worth taking a moment to look at long-term rainfall records to see where this fits in the bigger picture.

Imagine you are standing at the cattle yards at the Alice Springs Show. Someone new to the region asks about our annual rainfall and we are quick to reply that it is around 260mm to 270mm. However, most of our grass growth occurs during the warmer weather from October through to March, and the average rainfall for Alice Springs during the summer period is 199mm.

Average rainfall totals are calculated by adding up the rainfall totals for all the years on record and dividing that by the number of years. This is also known as the mean rainfall. The problem with this method is that the exceptionally wet years really distort the average in our variable climate. A better way of looking at it is to consider the median. The median is calculated by listing all records from the highest to the lowest and using the middle record to describe what you get half of the time. Table 1 shows that the median summer rainfall for Alice Springs is 174mm, a much lower amount that the annual mean.

As well as looking at summer rainfall totals, it is also important to think about how much effective rain has occurred. In arid regions, it is well understood that about half the rainy days are isolated occurrences. It is very common to have small daily falls of anything from 1mm to 25mm with two or three weeks between each fall, just enough to settle the dust but not grow any grass. These small events can quickly add up to 70mm or 80mm over the summer. If we take that off our median summer rainfall for Alice Springs, our effective median summer rain drops from about 174mm to about 100mm. To reiterate, that means in half of all years the effective grass growing rainfall is often less than 100mm which isn’t a lot but is still enough to get a pasture growth event.

For pasture growth to occur, enough rainfall is required to maintain positive soil moisture levels for one week. Positive soil moisture levels mean there is enough water in the soil for plants to get a drink. These conditions are described as initial effective rainfall and are more likely to occur when it is overcast for a couple of days, reducing evaporation. Initial effective rainfall allows for germination of annual plants (such as oatgrass, button grass and pigweed) and regrowth of perennial plants (such as buffel grass, umbrella grass and saltbushes). Around Alice Springs, initial effective rainfall in summer is approximately 30mm and such an event happens about twice a year (see table 2 below).

To achieve mature growth with a bulk of feed that can provide useful pasture, a carryover rainfall event is needed. This requires a combination of rainfall and low enough evaporation to maintain positive soil moisture levels for about four weeks. Around Alice Springs, this requires at least 60mm of rain and tends to occur about once each summer. Defining a pasture growth event can be tricky as there is a range of variables that contribute to ensuring suitable conditions, including: the amount of initial effective rainfall, the timing and amount of follow-up rain, and low enough evaporation rates (influenced by temperature, humidity, cloud cover and wind). The amount of rain required for a pasture growth event also varies across the region, and is affected by land type, soils and the time of year.

Between Alice Springs and Tennant Creek, the likelihood of getting one or two growth events per year is quite high. However, the chance of getting an annual growth event declines the further south you are, and a full growth event might only be experienced once every few years near the South Australian border, such as at Charlotte Waters (table 2). The rainfall data for the past 30 years shows that around Alice Springs, growth events have occurred in most years, even if the annual rainfall total is often quite low (figure 1). Making the most of these growth events is critical for consistent, profitable production.

While the very wet years can provide an opportunity to improve land condition and build a reserve of feed that could last for a couple of seasons, it is important that long-term production goals and stocking rates are not based on average or above average rainfall. Even using median rainfall as the ‘normal’ condition can be misleading; it is important to remember that half of all years will be drier than the median. For the summer of 2020/2021, Alice Springs received 275mm of rain, well above the average of 199mm and the median of 174mm. In fact, this summer was in the 80th percentile, which means that eight out of every 10 years would be drier. For long-term planning (20 years), it would be wise to expect only four summers to be as wet or wetter than the one we have just experienced. It’s not likely that this is the ‘new normal’!

In the next issue, we will investigate the characteristics of Central Australian landscapes that enable a productive grazing industry in such a variable climate.

Figure 1. Number of growth events at the Alice Springs Airport from 1990 to 2020. A growth event is described as approximately 60mm, or more, falling within a period of about two weeks. 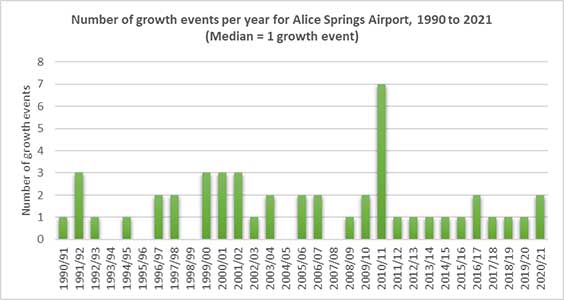 Back to NT Rural Review - May 2021
Back to top
URL: https://industry.nt.gov.au/publications/primary-industry-publications/newsletters/regional-newsletters/rural-review/nt-rural-review-may-2021/where-does-this-summer-fit-in-the-long-term-rainfall-record 28 January 2022, 12:48 am