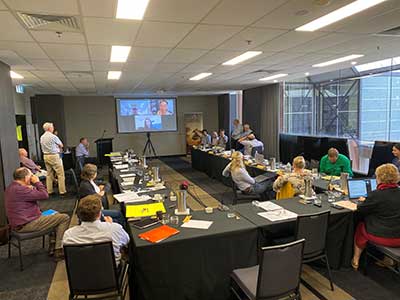 Caption: During the NABRC meeting- one of the workshops on the role of the RBRC’s chairs and secretaires.

The North Australian Beef Research Council (NABRC) is an independent organisation made up of producer representatives, research organisations, education providers and farming organisations with the aim of giving oversight and guidance to the direction of research and research funding for the northern beef cattle industry.

NABRC held the first of their biannual meetings in Darwin in March this year with members travelling from Queensland, Western Australia and across the Northern Territory to attend. In attendance were the chairs of each of the 11 regional beef research committees (RBRCs) and their secretaries, where possible, as well as a representative from each of the relevant research organisations and industry bodies. Attending from the NT Department of Industry, Tourism and Trade (DITT) were Tim Schatz, the department representative on NABRC, and Kieren McCosker and Gretel Bailey-Preston, secretaries of the Katherine Pastoral Industry Advisory Committee (KPIAC) and Barkly Research Advisory Committee (BRAC) respectively.

A major function of the meeting was to review the roles of the RBRCs’ chairs and secretaries to improve the running of the committees. There were presentations from experienced chairs and secretaries and interactive workshops about these roles and their purpose. It was a great opportunity for networking face-to-face, which has been on hold during COVID-19 restrictions.

This NABRC meeting saw the changeover of NABRC chair from Dr Lee Fitzpatrick to Dr John Taylor. The chairs of the BRAC and the Central Queensland regional committee, Ben McGlynn and Swin Hudson respectively, are both resigning after many years. We thank Ben for his many years of involvement with BRAC and for representing the Barkly region on NABRC. We are looking to replace Ben soon.

There was an informative talk about the new Northern Breeding Business (NB2) program from Dr Lee Fitzpatrick, the chair of the NB2 management committee. He outlined the background of NB2, gave an update on progress to date and details of the pilot program to begin soon. There was also information presented about the current foundation projects that are part of NB2, including the DITT uSuckled project. The NB2 program hopes to enhance research, development, extension, and adoption for breeding and profitability of beef enterprises in the north.

Other presentations included updates from the Livestock Productivity Partnership (LPP) program that aims to improve ruminant efficiency with research going into Fecal near infrared spectroscopy (FNIRS) to predict pasture quality as well as supplementation. An update was also received on the National Livestock Genetics Consortium (NLGC), which is aiming to increase adoption of genetic technologies and improve the productivity of the beef industry through genetic improvement and the results of the Northern Austrialian Beef Industry Situation Analysis project were also presented. 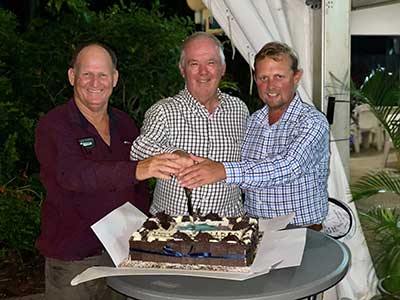 For more information about the NT committees, contact Livestock Industries:

Back to NT Rural Review - May 2021
Back to top
URL: https://industry.nt.gov.au/publications/primary-industry-publications/newsletters/regional-newsletters/rural-review/nt-rural-review-may-2021/nabrc-meeting-darwin-16-to-18-march-2021 28 January 2022, 12:48 am