Managed pollination and the transmission of a plant virus - what’s going on and should we be worried? 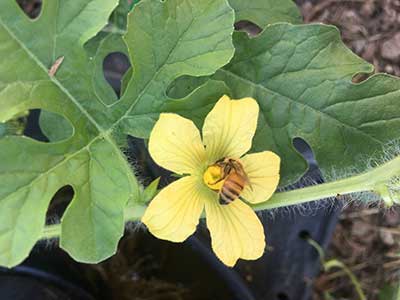 Caption: Get the buzz on the role of honey bees in CGMMV transmission

HortInnovation VM18008: Understanding and managing the role of honey bees in CGMMV epidemiology

In June 2020, the Australian melon industry was valued at $152.1 million. The Northern Territory (NT) produces 25% of all watermelons grown in Australia. Cucumber green mottle mosaic virus (CGMMV) is a plant virus first detected in the NT in 2014. CGMMV is a virus of cucurbit crops, including watermelon, cucumber, melons, zucchini and pumpkin. CGMMV can cause substantial crop losses. As a trade-sensitive pest, there is a national plan for managing CGMMV in Australia to prevent spread, reduce impacts on currently affected regions and mitigate trade impacts.

CGMMV is most likely introduced into a crop through infected planting material (soil, seed or seedlings) and can be mechanically transmitted, by something as small as using secateurs to prune plants, or something as large as driving a tractor through a crop.

This raises a question. Are honey bees able to transmit CGMMV?

The short answer is yes. However, there are gaps in our knowledge. The NT-based project team is trying to determine exactly how this may impact Australian apiarists and melon producers.

CGMMV is not known to affect bee health. The main concern is that if honey bees are exposed to CGMMV and then moved significant distances within or between states, they may move this highly destructive plant virus to new locations.

In the past year, the research team has shown that:

The research has also found that removing the honey frames in a bee hive that contains CGMMV and placing the hive on a resting site (with no cultivated cucurbits nearby) can reduce the levels of CGMMV detected in the hive after 12 months.

This field season we will be working to determine if the CGMMV detected in various bee hive products (such as wax and honey) is viable and capable of causing plant disease, and running field trials to see if honey bees from a hive containing living CGMMV are able to transmit the virus to clean plants. 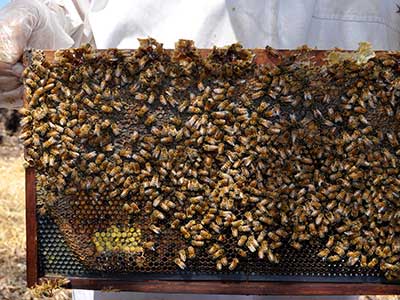 Caption: This season the department will test products from inside the beehive

The project will also produce a literature review of what is currently known about the potential for honey bees to transmit other pathogens aside from CGMMV. The review will cover viruses, bacteria, fungi and nematodes and will allow the apiary and horticulture industries to assess and identify future threats.

The project is due to wrap up in December 2021.

Back to NT Rural Review - May 2021
Back to top
URL: https://industry.nt.gov.au/publications/primary-industry-publications/newsletters/regional-newsletters/rural-review/nt-rural-review-may-2021/managed-pollination-and-the-transmission-of-a-plant-virus-whats-going-on-and-should-we-be-worried 28 January 2022, 12:48 am