Buffel grass is a valued pasture species for livestock in Central Australia. Typically, it occurs with native grasses and is capable of producing large amounts of palatable, nutritious feed. Buffel grass also does well under irrigation, providing a secure source of feed in a region that is known for low and unreliable rainfall. While growing irrigated fodder for grazing as pasture isn’t common in Central Australia, the managers at Territory Grape Farm, Janet and Roy Chisholm, have access to a good supply of water and the infrastructure necessary to grow approximately 50 hectares of buffel grass under pivots.

Janet says, “We wanted to create a body of feed for our cows and calves regardless of rainfall. It was pretty clear that buffel grass would do well with irrigation but we were also aware that it can cause oxalate poisoning so we wanted to find out more.”

Buffel grass can have very high concentrations of soluble oxalates, particularly when it is young and actively growing. Under certain conditions, such as when growing as a monoculture or at the end of extended dry periods, high oxalate concentrations may lead to health problems for livestock if the soluble oxalates are absorbed into the blood stream and bind to calcium ions. For particular groups of cattle, this can cause either acute hypocalcaemia or the formation of calcium oxalate crystals. Calcium oxalate crystals that form in the kidney tubes can interfere with kidney function and cause urinary obstruction. Calcium oxalate crystals can also damage blood vessels, as well as organs including the liver and the rumen wall. Although the occurrence of oxalate poisoning in cattle is probably very low for well-managed stock, groups of cattle that are most susceptible include hungry animals, travelling stock, those not accustomed to high oxalate pastures, first-calf heifers and young male cattle with periodic low water consumption.

From July 2019 to June 2020, a study was undertaken on Territory Grape Farm to investigate soluble oxalate levels in buffel grass under irrigation. Located approximately 180km north of Alice Springs, it has uniform red, sandy soils. Rain can occur at any time of the year but mostly in summer (warm wet summers and cool, dry winters). The area doesn’t typically get frosts in winter and it is usually warm enough for some buffel grass growth to occur all year round if there is sufficient soil moisture.

What did we do?

At the Territory Grape Farm, one hundred and twenty Santa Gertrudis crossbred and Droughtmaster cows, and their progeny (65 calves), were put on the buffel pasture in early April, three months prior to the commencement of irrigation in July 2019. Blood samples were collected from 30 individual cows in April 2019. Twenty-four cows were resampled in June 2020 after 12 months grazing the irrigated buffel grass.

Irrigated buffel grass was grown under two 25 hectare centre pivots. The pivots applied water on alternate days to deliver 50mm of water per week over the study period.

During the study, Territory Grape Farm received 215.6mm of rain, a little lower than the median of 297.8mm. Most of the rain fell in an event at the end of January, extending into early February, with follow-up rain in early March. This meant that rain‑fed buffel grass on Territory Grape Farm was actively growing from February to May 2020. The sites on OMP also received rain (93mm) in late January and early February resulting in a pasture growth event.

Buffel grass grows well in warm conditions and daily maximum temperatures were suitable for the irrigated buffel grass to grow for pretty much the entire study period. However, it is likely that growth would have been slower during July and August 2019, and again from May to August 2020, when temperatures were cooler.

Soluble oxalate levels in the irrigated pasture were consistently above the recommended <2% of dietary dry matter (DM) for the measured periods. In contrast, in the non-irrigated buffel, on both Territory Grape Farm and OMP, soluble oxalate levels only exceeded the recommended threshold for short periods after the rain-fed growth event in late January and early February 2020 (figure 1).

Figure 1: Soluble oxalate percentage in buffel grass over the study period separated by grazing and watering treatment and sampling site (Note: The broken lines only connect data collected prior to irrigation or rain initiated pasture growth to data post pasture growth and do not represent the change or trends in soluble oxalate levels during those periods). 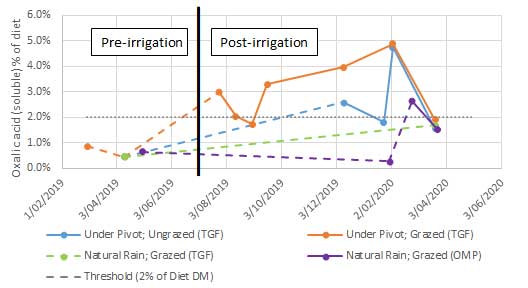 Oxalate levels can vary depending on the growth stage of a grass plant. Soluble oxalate levels were especially high during the early growth phase, when the buffel had lots of fresh, green leaves. This occurred in both the irrigated pastures and the rain-fed pastures. Under irrigation and consistent grazing, buffel grass was kept in this early growth phase. Without grazing, the irrigated buffel reached maturity. Grazing pressure on the rain-fed buffel at OMP was much lower and these plants also progressed to maturity.

Figure 2: There is a strong relationship between buffel grass moisture content and level of soluble oxalates.

The OMP site is more typical of an extensive rangeland pasture where cattle have access to a variety of grass species. After the January and February rainfall, soluble oxalate levels in the buffel grass peaked with almost twice the recommended threshold percentage of dietary DM, but levels dropped quickly as the plants matured. The two native grasses tested did not contain oxalates at any stage so, if buffel grass contained a high level of soluble oxalate, cattle grazing a mixed diet with those grasses could have a better chance of a dietary intake below the recommended threshold level for reduced risk of oxalate poisoning. It is also possible that oxalate levels only increased above the recommended daily limit for a short period and that animals didn’t consume enough over that time to be badly affected.

How did the high levels of soluble oxalate in the irrigated buffel grass affect the cattle?

Blood samples were collected twice from breeder cows at Territory Grape Farm: 3 months prior to irrigation and again at the end of the study (photo 1). The samples were analysed for calcium, albumin and phosphorus because the concentration of these can all be affected by a high oxalate diet. Urea and creatinine levels were also measured as an indicator of kidney health. 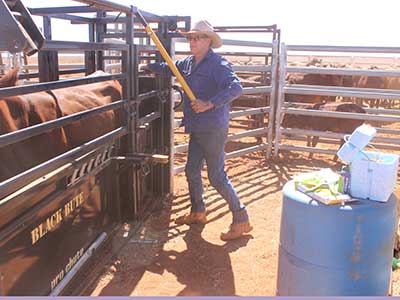 Despite soluble oxalate concentration being high, all the blood parameters tested remained in the normal range. Calcium levels were slightly lower at the end of the study, but well within the normal range for good health.

At the end of the study, albumin levels were also slightly lower than the initial levels but this could have been due to possible dehydrated of the cattle when the initial samples were taken. Slightly elevated albumin levels are not uncommon in hot regions and may be a symptom of dehydration.

Phosphorus levels were slightly higher in 2019 compared with 2020, but were still within the normal range.

Urea and creatinine, which are good indicators of kidney health, were significantly different between the two sampling periods but were also well within the normal range. Based on the elevated albumin, the differences between urea and creatinine in 2019 and 2020 may also be explained by slight dehydration in the mob at the first bleed (Shilton pers. comm. 2020).

Soluble oxalate levels in the irrigated, constantly grazed buffel grass remained higher than the recommended <2% of dietary DM. Although the cattle in the study were exposed to extended periods of potentially toxic soluble oxalate levels, their blood parameters did not indicate evidence of oxalate poisoning. Cattle rumen flora have the ability to adapt to high oxalate levels. In this instance, the cows had been exposed to a diet high in buffel grass before the study. It is likely that their rumen flora adapted to break down oxalates which reduced potential ill effects of high oxalate levels. That aside, the study did identify several key management options that would help minimise the likelihood of oxalate poisoning in ‘at risk’ cattle.

As Janet says, there are still many questions to answer, such as, “It was really interesting that the highest spike in oxalates was after the summer rain. How much does the nitrogen in the rain contribute to that spike and would that be something to consider if we decided to use nitrogen to increase grass growth under irrigation?”

Special thanks go to:

Back to NT Rural Review - May 2021
Back to top
URL: https://industry.nt.gov.au/publications/primary-industry-publications/newsletters/regional-newsletters/rural-review/nt-rural-review-may-2021/investigating-the-risk-of-oxalate-poisoning-for-breeder-cows-grazing-irrigated-buffel-grass 28 January 2022, 12:48 am