Grader grass - not a great grass 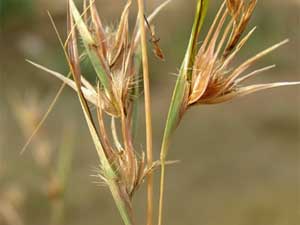 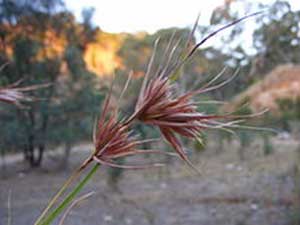 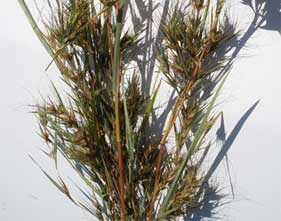 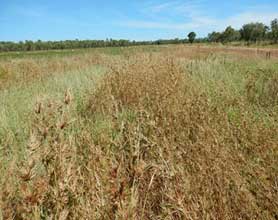 This year’s wet season has brought a vast improvement in pastoral growth in many areas when compared to the previous several years. However, the improved conditions and improved growth can also bring about the emergence of undesirable pasture species and woody weeds.

One such species recently spotted on several properties in the Katherine region is Themeda quadrivalvis, commonly known as grader grass. Grader grass is a Class B weed in the Northern Territory (NT). This means that land managers are required to actively identify and control existing infestations, and to prevent any new infestations.

Grader grass is invasive and when mature has very low palatability except when the grass is young. Pastures can become degraded and quickly overrun, as well as the fire risk being greatly increased due to the resulting high fuel loads. It favours disturbed soil, such as: roadways, fire breaks, drainage lines and heavily grazed pastures.

Grader grass is an erect tussock grass with an average height in the NT of one to 1.5m. As it matures, grader grass turns a distinctive orange-red or golden colour. At that stage, it has cane-like stems with triangular or fan-shaped seed heads and no leaf at the base. It is a rapidly growing annual species capable of yielding in excess of 5,000kg/ha within a single growing season.

Grader grass is quite similar in appearance and can be easily confused with the native perennial kangaroo grass Themeda triandra. Kangaroo grass is highly palatable, especially when young, and is generally smaller in height growing to around 1m. It has a more brown than orange-red colour when mature with leaves at the base of the plant.

Kangaroo grass is most reliably distinguished by the size of the spikelets and the nature of the hairs on their seed heads. Spikelets are eight to 14mm long and are either hairless or with fine hairs, and have only a slightly bulbous base. Grader grass has smaller spikelets four to 7mm long with conspicuous, bulbous-based bristles on the seed head. Kangaroo grass has more leaves that have flat margins, as opposed to the leaf margins of grader grass which are often folded. Kangaroo grass generally go to seed earlier in the season than grader grass. Early to mid-wet season it is not uncommon to see seed heads on Kanagaroo grass, while seed heads can appear between February and June but are generally seen from late March in the NT for grader grass.

As grader grass can be difficult and costly to control, weed hygiene is one of the preventions to incursion. Natural vectors, such as wind, do not easily disperse the seed. The primary modes of seed spread are via movement of vehicles, fodder, machinery or livestock through infested areas. Good hygiene practices will significantly reduce the risks of seed introduction and spread. Avoiding driving through infestations, cleaning vehicles and machinery thoroughly and regularly, and ensuring hay, pasture seed and livestock are uncontaminated before being purchased or moved will help reduce the spread of seeds. The development of a robust weed hygiene plan will be of great benefit in controlling the spread of grader grass, along with many other weeds.Grader grass sets a lot of seed. Soil seed banks can contain up to 20,000 seeds per square metre. The viability of seed on the soil surface declines rapidly within15 to 18 months. However, up to 30% of seed buried at 5cm can remain viable for over 18 months. Disturbance of the area through activities such as grading, overgrazing or fire can expose the seed to favourable conditions and reignite a previously dormant infestation. In northern Australia mass germination and seedling emergence occurs within three to four days of significant rainfall.

Managing pastures to minimise disturbed soils and exposed areas is a key strategy to preventing and controlling infestations. Preventing erosion and avoiding the overuse of fire, overgrazing, short-slashing, the use of non-specific herbicides are all key management factors in the control and prevention of grader grass.

Employing good grazing land management practices to keep a high percentage of perennial pastures will prevent invasion by supressing the germination of grader grass seed. It will also assist in reducing existing infestations.

Burning pastures can provide an ideal environment for an explosion in grader grass seedlings due to the removal of cover and competition from other grasses. Avoid burning grader grass infested areas completely if possible or limit burning to no more than once every five years. Carefully manage burnt areas by resting them until pastures have seeded to avoid or reduce any further establishment.

Slashing at full flowering prior to seed is a useful control method for grader grass. However, the short window of one to two weeks following seed head appearance means this can be hard to achieve due to adverse weather conditions and access to infestations. Slashed plants can also produce new seed heads if there is significant soil moisture present at the time or if there is sufficient rainfall soon after slashing. Due to these challenges, slashing is a viable control option for small, easily accessible infestations but is not practical for large areas.

Glyphosate is currently registered for control of grader grass in pastures, along roadsides and firebreaks, and around infrastructure. Spraying must be done before seed set in order to prevent re-establishment the following year. This method should be limited to areas where grader grass is the only remaining species as glyphosate is non-selective. It is recommended that desirable pasture seed should be sown soon after spraying to encourage competition with the next crop of seedlings. Spraying is recommended for smaller, isolated infestations as it becomes cost-prohibitive for larger scale infestations.

Due to the limitations outlined in these control methods, reducing the grader grass population in large‑scale infestations is a challenge. The most cost-effective control method for larger areas and dense infestations is implementing a well thought-out pasture spelling program and avoiding overgrazing. This will ensure soil disturbance is kept to a minimum and high levels of productive, perennial grass species will provide strong competition for any established grader grass plants and future seedling emergence. A long-term spell of a minimum of two years across dense infestations and a strong weed hygiene program are recommended in order to regain some grazing production while steadily reducing grader grass density.

Whichever control method is implemented, the key to success is consistent checks in the following years to ensure the grader grass seed bed is thoroughly depleted.

If you have a new or previously identified grader grass infestation to report:

Back to NT Rural Review - May 2021
Back to top
URL: https://industry.nt.gov.au/publications/primary-industry-publications/newsletters/regional-newsletters/rural-review/nt-rural-review-may-2021/grader-grass-not-a-great-grass 28 January 2022, 12:48 am