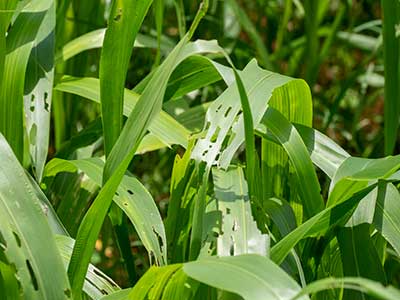 Since its arrival in Australia at the beginning of 2020, the fall armyworm (Spodoptera frugiperda) has continued its spread and during the summer months has migrated to the southern states. In the Northern Territory (NT) it has been trapped as far south as Alice Springs.

The department has continued its work on mapping the distribution and seasonality of the pest using pheromone traps to attract the male moths, which are then identified by dissection or by molecular techniques. We are maintaining a laboratory colony for experimental work and documenting the current host plants. To date, we have only recorded this pest on plants from the grass family (Poaceae), including maize, sweet corn, sorghum, millet and Rhodes grass, but there are a large number of other potential hosts recorded from overseas. During this wet season, significant damage has been caused to sorghum crops being grown for forage on cattle stations.

The department is collaborating with Queensland and Western Australia on the developing situation and is a partner with these two jurisdictions in a Hort Innovation funded project surveying for biological control agents including parasitoids, predators and entomopathogens (insect diseases). We have also provided material to CSIRO and New South Wales Department of Primary Industries for molecular testing for insecticide resistance.

The department provides advice on control measures to growers and has a range of extension material available: 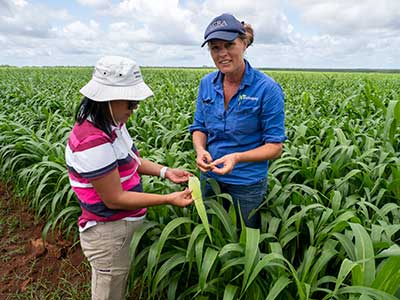 Caption: Fall armyworm can cause damage to crops and has been found in the Territory. Entomologist Praise Tadle (NT Department of Industry, Tourism and Trade) and Simone Cameron (NT Farmers Association) check for fall armyworm

Advice on identification, biology and control can be obtained from:

Back to NT Rural Review - May 2021
Back to top
URL: https://industry.nt.gov.au/publications/primary-industry-publications/newsletters/regional-newsletters/rural-review/nt-rural-review-may-2021/fall-armyworm 28 January 2022, 12:48 am