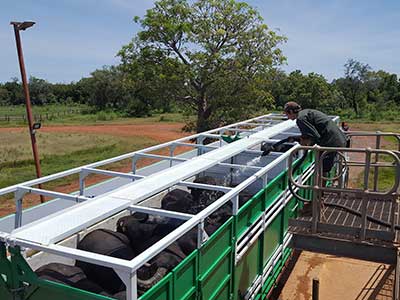 Caption: Buffalo enroute from Beatrice Hill in the NT to Quindanning in WA

Riverine Buffalo have safely made the 4,410km journey from the Department of Industry, Tourism and Trade’s Beatrice Hill Research Farm in the Top End of the Northern Territory (NT), to their new home on a 400 hectare farm near Quindanning, two hours south of Perth in Western Australia (WA).

“These buffalo are the product of a breeding program which started in 1994 when we imported four heifers and four bulls from the United States. Since then, semen from around 20 Italian Riverine Buffalo was also introduced, to ensure genetic diversity”, said respected buffalo researcher and breeder Barry Lemcke, who developed the herd at Beatrice Hill.

A hardy and quiet breed, the Riverine Buffalo produces up to 20 litres of milk per day, which contains twice the milk solids of regular cow’s milk, making it well suited for cheese and yoghurt production.

“While it takes 10 litres of cow's milk to produce a kilo of cheese, it only takes 5 litres of buffalo milk. This means dairy buffalo farmers can command a premium price for their product”, Mr Lemcke explained.

Local knowledge and expertise made all the difference

“Given WA’s strict quarantine laws, the experience is not for the faint hearted”, said the new owner of the buffalo, Graeme Carthy. “Special thanks to buffalo expert Barry Lemcke who played an instrumental role in completing the mountains of paperwork required to get the buffalo across the border”.

This was backed up by logistical support from Michael Swart of Wildman River Stock Contractors, who was the driving force making it happen, responsible for transporting the animals and ensuring their wellbeing throughout the journey. Their combined expertise is what got the project across the line.

“The agriculture departments on both sides of the border were also the best I've dealt with in a long time and I've had a lot of exposure to various government departments over the years”, added Mr Carthy.

The future looks bright for the NT buffalo industry

When asked about the significance of this deal and what it means for the NT buffalo industry Michael Swart said, “This exercise reconfirms our belief there is a marketplace for Riverine Buffalo, both locally and internationally. We are just starting to get somewhere in developing the free-range buffalo industry, holding weaners over the wet season so we can feed them into the live export trade.”

When asked about their potential for dairy exports, Mr Swart added, “It will only be a matter of time before we establish large dairies of Riverine Buffalo here in Australia that feed into the South East Asian market to our north.”

As the herd settles in, their new owner is optimistic about the long term potential in buffalo

Echoing Mr Swart’s comments, Graeme Carthy sees huge potential for buffalo products in WA. “This is an opportunity to be a price setter rather than a price taker, as we’re getting in on the ground floor. I’m considering a variety of options for both buffalo milk and meat products. There’s been a lot of interest in the milk, particularly from boutique markets. While buying the herd was a big outlay to start with, I take a long-term view on the investment”, Mr Carthy said. 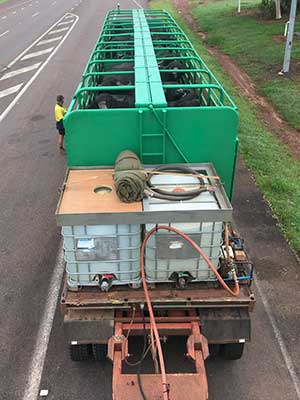 Caption: Buffalo enroute from Beatrice Hill in the NT to Quindanning in WA

Back to NT Rural Review - May 2021
Back to top
URL: https://industry.nt.gov.au/publications/primary-industry-publications/newsletters/regional-newsletters/rural-review/nt-rural-review-may-2021/beatrice-hill-buffalo-start-a-new-chapter-in-southern-western-australia 28 January 2022, 12:17 am