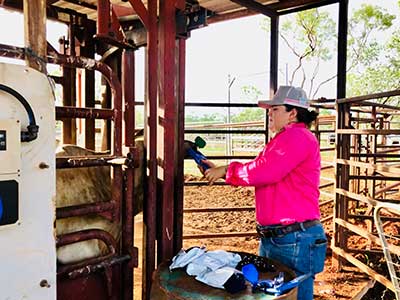 In mid-December 2021, the Katherine Livestock team headed out to Mathison Station to begin the YTex Fly tag trial.

Insecticidal fly tags are used to reduce production and welfare issues posed by buffalo flies, which include decreased weight gain and milk production, and increased heart and respiration rates. The use of these tags has proven beneficial in Queensland studies, where weight gains were recorded in cows, heifers and weaners whose dams had fly tags.

A trial at the Douglas Daly Research Farm saw similar results in bulls, however the effect of using fly tags in the Katherine region is unknown. The aim of the Mathison trial is to evaluate the effect of fly tags on the behaviour and liveweight gain of heifers, during the wetter months of the year while the fly burden is high.

The Katherine team’s Elle Fordyce and Georgia Glasson took the Katherine Acting Regional Director, Jess Powter, out for the day to get involved in processing the heifers. Out of the 158 head inducted into the trial, 79 heifers were tagged with a fly tag in each ear (fly tag group) and 79 heifers did not receive fly tags (control group). Nine heifers from each group were fitted with GPS collars. These cattle were weighed before being returned to their usual wet season paddock with a larger mob of breeders.

The trial heifers will have their tags and collars removed in the first round muster of 2022 when behavioural GPS data and weight changes will be recorded. This data will quantify the production benefits of fly tagging in the Katherine region for individual animals and confirm the behavioural changes that likely influence this.

The Department of Industry, Tourism and Trade would like to give a big thanks to Mathison Station owners Jay and Bec Mohr-Bell for their assistance and willingness to participate in this trial. 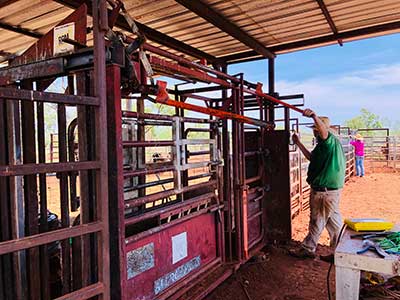 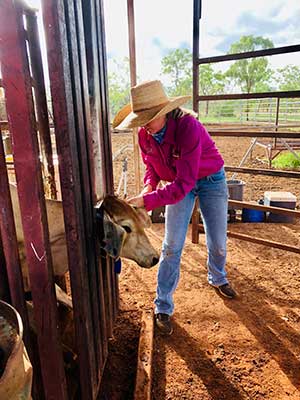 Back to NT Rural Review - February 2022
Back to top
URL: https://industry.nt.gov.au/publications/primary-industry-publications/newsletters/regional-newsletters/rural-review/nt-rural-review-february-2022/ytex-fly-tag-trial-at-mathison-station-in-katherine 8 August 2022, 6:46 am