Restoring productivity in the rangelands

Even when it is pouring with rain, many producers are still planning ahead for the next dry year. When the landscape and the herd are in good condition, it can be easier to ride out the dry spells.

But how do producers improve land condition on pastoral land while still carrying cattle? Not surprisingly, locking up country isn’t a very palatable option. A long-term grazing trial in Central Australia has demonstrated that it is possible to improve land condition while maintaining a stable breeder herd and producing high-value steers for the premium beef market.

The key to success seems to be maintaining the stocking rate at close to the recommended long-term safe carrying capacity.

Quality Graze is a 15 year grazing trial at the Department of Industry, Tourism and Trade’s Old Man Plains Research Station (OMP), south-west of Alice Springs. During a period that included both the wettest year and the driest 3 year period on record, production has remained consistent. This stability has helped reduce stress on the human, cattle and natural resources.

The department is trialling 6 grazing strategies at OMP. These are all based around long-term safe carrying capacities. Some of the strategies have set stocking rates, while others allow annual adjustment. Some strategies use rotation to achieve spelling (rest from grazing).

Prior to 2002, OMP was part of the Owen Springs pastoral lease, with a long grazing history. Ground cover levels were similar to surrounding pastoral land. Although the grazing trial started in 2006, recovery of ground cover didn’t really take off at OMP until the consecutive La Niña wet seasons from 2009 to 2011. Since then, ground cover at OMP has been similar to, or higher than on, neighbouring properties.

There’s little doubt that the La Niña events were critical in accelerating land condition improvement from predominantly C-condition to B-condition for much of OMP. Getting the grazing pressure right has also allowed native pastures to recover. Buffel grass has become more established, contributing to cover and yield increases, especially in the drainage lines.

So what about spelling? At OMP, the grazing trials showed that recovery in ground cover was the same with or without spelling. While there can be many benefits of spelling, such as having fresh feed available for pre-trucking cattle, it has not been the key to improved land condition in these trials. The evidence at OMP is that getting the long-term carrying capacity right is the most critical factor. In big rain years, as long as you don’t increase your cattle numbers, all of the country is effectively spelled because the cattle can’t keep up with the new growth.

In 2015, a new grazing strategy was added, with the stocking rate increased by 50%. The ground cover in this paddock has since declined and is now the lowest of all the strategies. After only 2 years, this paddock had significantly lower cover than the others. Pasture composition in this paddock tends to be dominated by early successional species, typical of what you might find after drought but also a common feature of land in poor condition.

The land condition improvement at OMP has reduced runoff and since 2012 most of the dams have rarely been full. An increase in ground cover and perennial grasses seems to have slowed surface water movement and increased infiltration of rain into the soil. This has improved the land’s ability to respond to rain. On some highly productive land types, the pasture yield per millimetre of rain has more than doubled. Interestingly, there is evidence that where the higher stocking rate was introduced in 2015 there is more run-off into the dam but poorer pasture response to rain.

A valuable characteristic of Central Australian pastures is their ability to retain nutritional quality for up to 2 years after curing. Improved land condition has resulted in more pasture growth and because it retains its value, there is more forage available well into the inevitable dry years. The improved rainfall use efficiency also means that pastures can respond to isolated storms. Even through the driest 3 year period (2017 to 2020) experienced in Central Australia, the Quality Graze project turned off the same number of high quality steers as in wetter years.

Over the past 15 years that OMP has been stocked at recommended rates, there has been an improvement in land condition, desirable grass species, increased ground cover and improved rainfall use efficiency. Cattle growth and beef production are now consistently high and cattle numbers stay pretty much the same, even through very dry years. 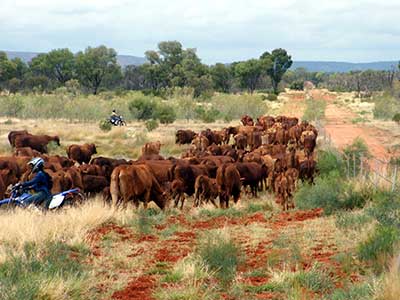 Back to NT Rural Review - February 2022
Back to top
URL: https://industry.nt.gov.au/publications/primary-industry-publications/newsletters/regional-newsletters/rural-review/nt-rural-review-february-2022/restoring-productivity-in-the-rangelands 29 November 2022, 10:56 am