While we gardeners like to pride ourselves on our deep connection to the natural world, we actually have a somewhat sketchy record when it comes to caring for country.

Australia has a pretty shameful number of weeds. Some arrived recently as fodder plants gone wild, some are part of our collective history, having arrived many years ago on the saddles of cameleers. A saddening number of weeds have been introduced by illegal dumping of green waste or through gardeners planting ‘a new little pretty’ to add to their collection. Some garden escapees were even introduced by the big players. A couple of the Northern Territory’s (NT) worst weeds were first introduced well before the 1950s into the George Brown Darwin Botanic Gardens as interesting or beautiful specimens.

There have been multiple deliberate introductions of bellyache bush, or Jatropha indica, in Australia. By the 1920s it was considered naturalised and here to stay. It is likely the bellyache bush originally arrived in the NT via plantings of a variety of Jatropha species at the botanic gardens around 100 years ago.

Bellyache bush is very much one of Snow White’s apples. All parts of the plant are poisonous to people and the fruit really does give animals a bellyache with the plant linked to a fair number of stock deaths.

Bellyache bush forms dense thickets and, in ideal conditions, reaches up to four metres in height, shading out native vegetation and pasture species. It seeds prolifically and can also grow from stem and root cuttings moved around in floods or by dumping of green waste.

It doesn’t matter if you own your patch or rent it, if you have a few tomatoes down the back or a pastoral lease the size of a small European country, we all have a legal responsibility to manage weeds on our land. Bellyache bush is a Class A weed over much of the NT. This means we must control it wherever possible and stop it spreading to other properties. 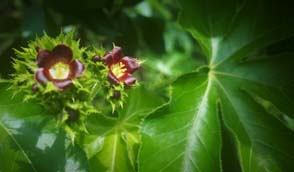 No results were found