Sudden deaths in weaners at mustering

Sudden death in 10 of 1500 weaner cattle during a muster on a property in the Darwin region was investigated. Staff had mustered and spelled the cattle the night before with no losses observed. The following morning, staff saw affected cattle briefly stagger, go down and have seizures before rapid death, within minutes, over the final 4 km of the muster.

Initial examination of the carcases occurred several hours after death due to the isolated location of cattle. Examination showed rapid decomposition with blood present at the anus and nostrils and/or mouth of all carcases. As these clinical signs were consistent with anthrax – a zoonotic notifiable disease which can be fatal to people, a blood smear was taken and submitted to the veterinary laboratory to exclude anthrax before a post-mortem was attempted. 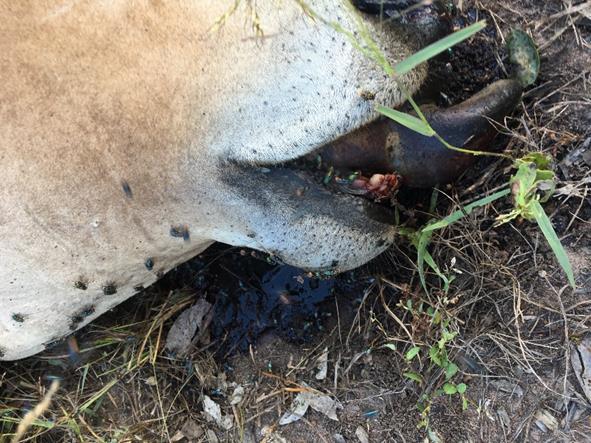 Figure 2. Haemorrhage from mouth of cattle in anthrax exclusion case

Anthrax is caused by thebacteria, Bacillus anthracis. In grazing livestock anthrax usually presents as the sudden death of one, or a group of animals in a mob. Affected stock often show few or no signs of ill health before they die. Anthrax survives for long periods in the environment by forming tough spores which lie dormant in the soil, and its re-appearance is unpredictable. It can recur more than 50 years after the last known case on a property. Carcases of animals that have died from anthrax are full of infectious bacteria. A feature of anthrax infection is failure of the blood to clot, so after death blood and body fluids ooze from the nostrils, mouth and anus. Although there has never been a case of anthrax reported in the NT, anthrax should always be excluded from cattle which die suddenly with blood oozing from the nostrils, mouth or anus.

In this case, post-mortem revealed all carcases to be in moderate stages of decomposition, having died up to 30 hours previously. All animals were in good body condition with no external wounds. Carcases had trapped air under the skin, with some having bruising and swelling of the abdomen.

There was an increased amount of abdominal fluid containing blood and blood serum in several animals. Examination of rumen contents showed all animals had adequate green roughage present. The rumen of one steer contained numerous 1-2cm unidentifiable green seeds. No unusual material was found in any of the other animals.

The veterinary laboratory cultured a species of the Clostridium sp. bacteria from collected tissue samples; this bacteria is a common post-mortem contaminant. Clostridia species that commonly cause diseases such as blackleg and black disease in cattle were not identified and unlikely to be the cause of this case. No venom was detected for tiger, brown, black, death adder or taipan snakes in the blood sample from the heifer, and the blood lead level was within the normal range excluding snake bite and lead toxicity as the cause of death.

Unfortunately, a diagnosis could not be confirmed in this case. Given the history of the property, the location of mortalities, the good body condition of the cattle affected and the rapid progression of clinical signs, the cause of sudden death was most likely exposure to an unidentified plant toxin.

Although the exclusion of the zoonotic notifiable anthrax disease was critical for staff health and safety, the delay in necropsy may have contributed to the inability to determine a definitive diagnosis. This case highlights the application of field based point-of-care tests to rule out zoonotic diseases such as anthrax to enable further investigation on property. The department’s regional offices now have access to anthrax exclusion test kits which allow the test to be undertaken immediately on property to avoid a delay in post-mortem and assist with timely diagnosis. 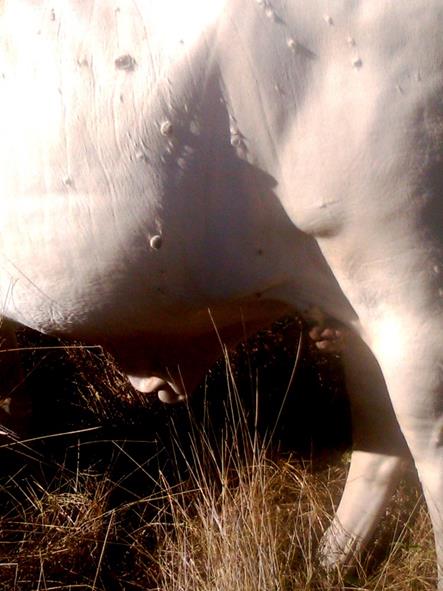 Bovine papillomavirus should not be confused with Bovine Herpes Virus (BHV-2) also known as pseudo-lumpy skin disease which also causes skin lesions on young cattle. Nodular skin lesions form and the nodules can easily be removed, leaving a hairless skin patch. BHV-2 generally has a high infection rate which is usually self-limiting. Animals completely recover within a couple of months. It is spread from one animal to another by biting flies. 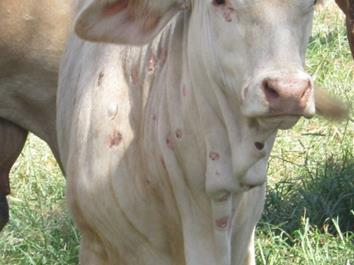 Persistent bovine pestivirus and osteomyelitis in a bull

During annual bull processing, the property manager in the Darwin region noted one two-year-old composite bull with swelling on the left side of its jaw. While the other bulls were in good condition, the affected bull was small for its age and in poor condition. Deemed unsuitable for treatment, the bull was euthanized and a full post-mortem examination was performed.

Cutting in to the hard, bony, swollen lower jawbone revealed a cheesy core. Retained milk teeth were apparent at the first three molar teeth on the left jawbone, with corresponding ulceration of the inside of the cheek and tongue. 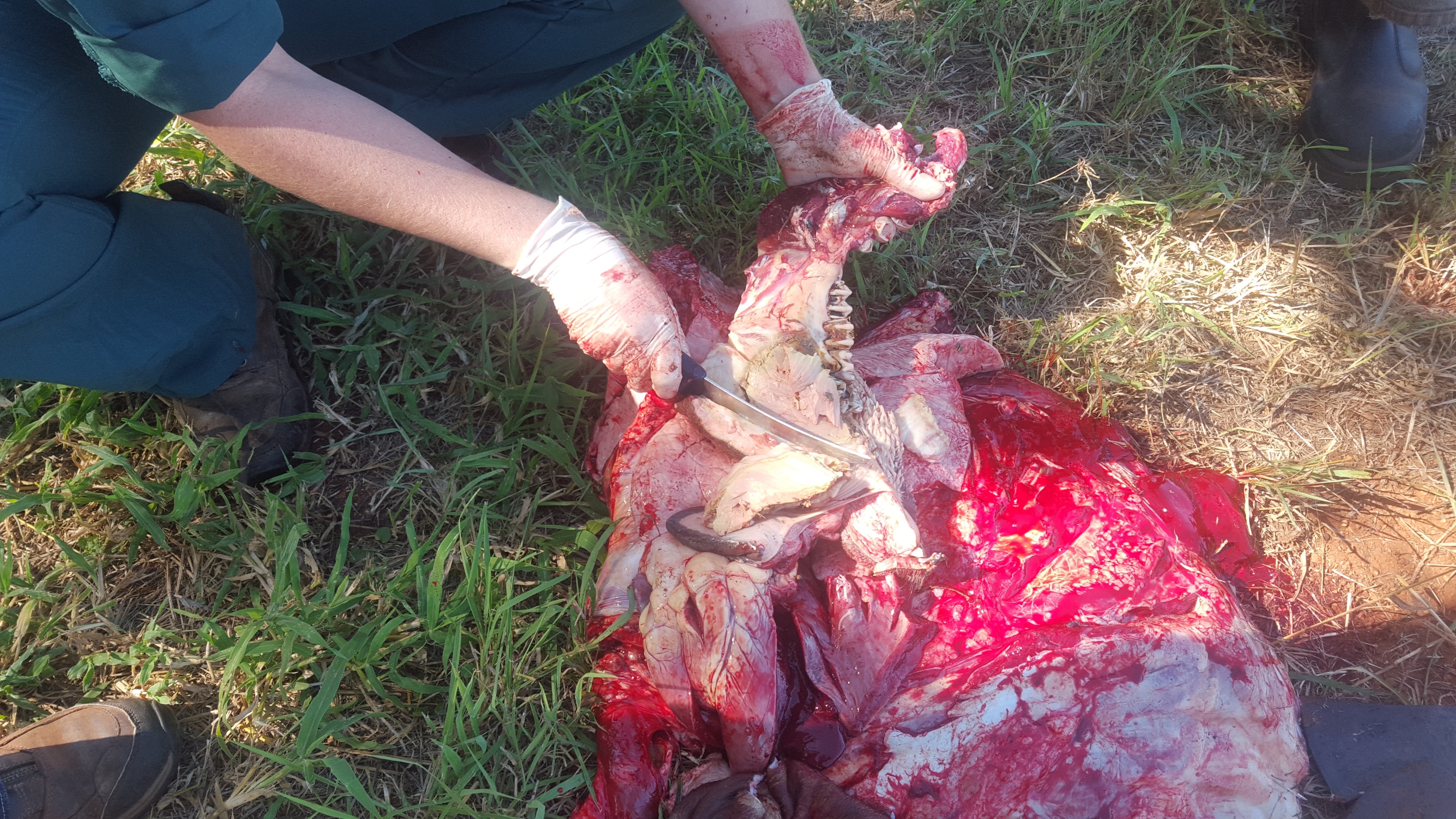 Histopathology showed a severe bacterial infection of the jaw bone (osteomyelitis) associated with bacteria, Fusobacterium necrophorum and Truperella pyogens. Two other more common causes of swelling of the mouth and jaw in cattle are lumpy jaw (Actinomycosis) and wooden tongue (Actinobacillus). The term ‘actino’ indicates that the inflammation caused by these bacteria results in the formation of pus containing colonies of bacteria in the soft tissue or bone.

Faecal parasitology revealed a high faecal egg count of 2060 eggs/gram with larval culture identifying 100% Haemonchus sp (barber’s pole worm). Haemonchus can lead to ill-thrift, weight loss, anaemia, weakness and reduced grow rates or death. A narrow spectrum anthelmintic such as Closantel chemical can be used to treat haemonchosis infestation, however a broad spectrum such as a macrocyclic lactone (ML) or Ivermectin-based chemical can be used to prevent worm infestations. Drenching is not usually required for mature adult cattle, however. Heavy infestations of haemonchus can occur in weaners, particularly in the Top End and on flood plains. Drenching with a broad spectrum anthelmintic is one strategy which can be used to prevent clinical disease and death.

Infection with bovine pestivirus can compromise an animal’s immune system and lead to dental abnormalities, which in this case likely led to the high worm burden and severe progression of the dental infection to infection of the bone in this bull.

Ironwood toxicity in a goat

Sudden death in a pregnant nanny goat was investigated in the Darwin rural area. Two goats had been purchased from another property and were held in a small paddock with the existing goat herd overnight. The owner found one of the introduced goats dead the next morning. Post mortem examination revealed the pregnant goat was in good condition. There was haemorrhaging of the heart muscle and multiple ironwood leavesin the rumen. The veterinary laboratory excluded bluetongue virus, acute melioidosis and other bacterial infection.

Leaves from the ironwood tree contain diterpenoid alkaloids and ingestion of only a few leaves can cause toxicity in goats and cattle. Young trees are particularly attractive to hungry and introduced grazing stock. Young ironwood trees were identified in the holding paddock, and removal and exclusion fencing has prevented further losses. Hungry introduced stock should be held in a yard and fed good quality hay before release into a paddock containing ironwood trees to minimise risk of ironwood toxicity. 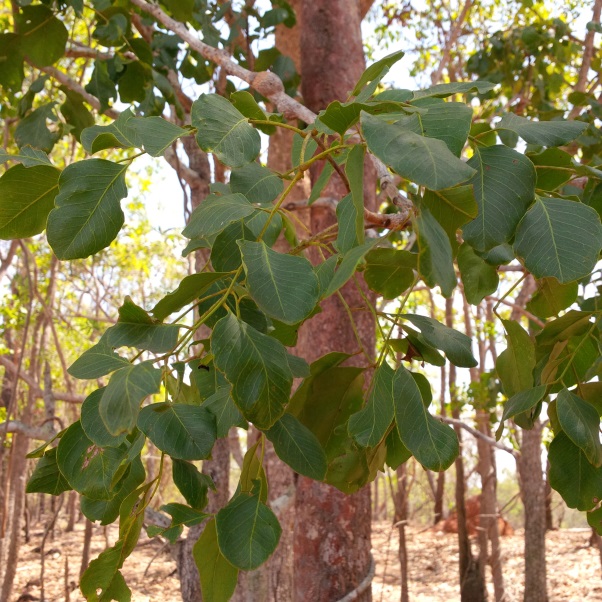