JT heads to the Territory for Aboriginal Economic Development Forum

Caption: Johnathan Thurston is among the speakers at the 9th Aboriginal Economic Development Forum in Darwin next month.

The Johnathan Thurston Academy will expand into the Northern Territory (NT), kicking off with Thurston attending the 9th Aboriginal Economic Development Forum to be held in Darwin on 7 and 8 November.

Since retiring from the game in 2018, Thurston has focused much of his energy on building his JT Academy where he and his team provide education engagement initiatives for young Australians and employment opportunities for all Australians.

They have had success across key parts of Australia and now they are looking forward to bringing the academy to the NT, which is only possible thanks to partnerships with key industry groups, government bodies and businesses such as Lendlease, who has been a major employment partner since the beginning.

“We have had some incredible success with the academy by partnering with schools, key government bodies and businesses, such as Lendlease, who actively engage with us to promote their job opportunities,” Thurston said.

“These partnerships have also allowed us to be able to facilitate and run workshops across a number of regional communities to focus on building courage, confidence and self-belief to prepare people to succeed both education and employment, including running young women’s programs.

“It’s incredible to see the positive change our workshops and programs can have on a young person and more often than not, it changes the direction of their lives.

“I am really excited to bring this to the Northern Territory to help young Australians have access to the resources they need to get meaningful employment.”

The Aboriginal Economic Development Forum, a biennial event, is the foremost event looking at Aboriginal economic development in the NT and how it can be supported not just by government, but also business and the broader community.

Supported by JT Academy’s major employment partner Lendlease, the session Live with Johnathon Thurston will be held on Thursday 7 November.

Thurston and his team from the JT Academy will attend other presentations at the forum and are thrilled at the prospect of hearing what plans are in the pipeline for the region.

For more information on the JT Academy, go to the Johnathan Thurston Academy website.

What may seem like humdrum statistics to many are pure gold to businessman Peter Shepherd.

He uses the data from the Northern Territory Government’s remote town job profiles to plan projects and apply for grants.

“I have used the data many times to demonstrate community needs,” he says.

“The figures are very useful and can make the difference in getting a project off the ground or not.”

Statistics showing the number of Aboriginal and non-Aboriginal employees on a community is crucially important.

For instance, the dramatic employment turnaround in the Arnhem Land township of Raminginging - from 82 Aboriginal workers and 55 non‑Aboriginal in 2011 to 204‑49 today - reshapes the planning of development projects and grant applications.

And the improvement in vocational educational training - fewer Aboriginal people taking courses but a vastly better pass rate of 70% - is useful in assessing the work capability in communities.

Peter’s Darwin‑based business consultancy, Business and Community Developments, is one of many companies and agencies that rely on the statistics.

Remote town job profiles, which are put together by the Department of Trade, Business and Innovation, are particularly useful in demonstrating trends, especially how many communities are becoming more like towns.

The profiles, which are published online, are used to inform government, industry and businesses about employment opportunities and business capabilities in remote towns, as well as for workforce and service planning and delivery.

The department has created an interactive dashboard for 28 remote communities to improve the user experience and support increased use of information.

To find out more on the remote town job profiles and to view the interactive dashboard, go to the Northern Territory Government website.

Early feedback is that the dashboard has improved stakeholder awareness of the profiles. Many people did not know the profiles existed and were surprised at the level of detail available.

The profiles contain a wide range of information, including: 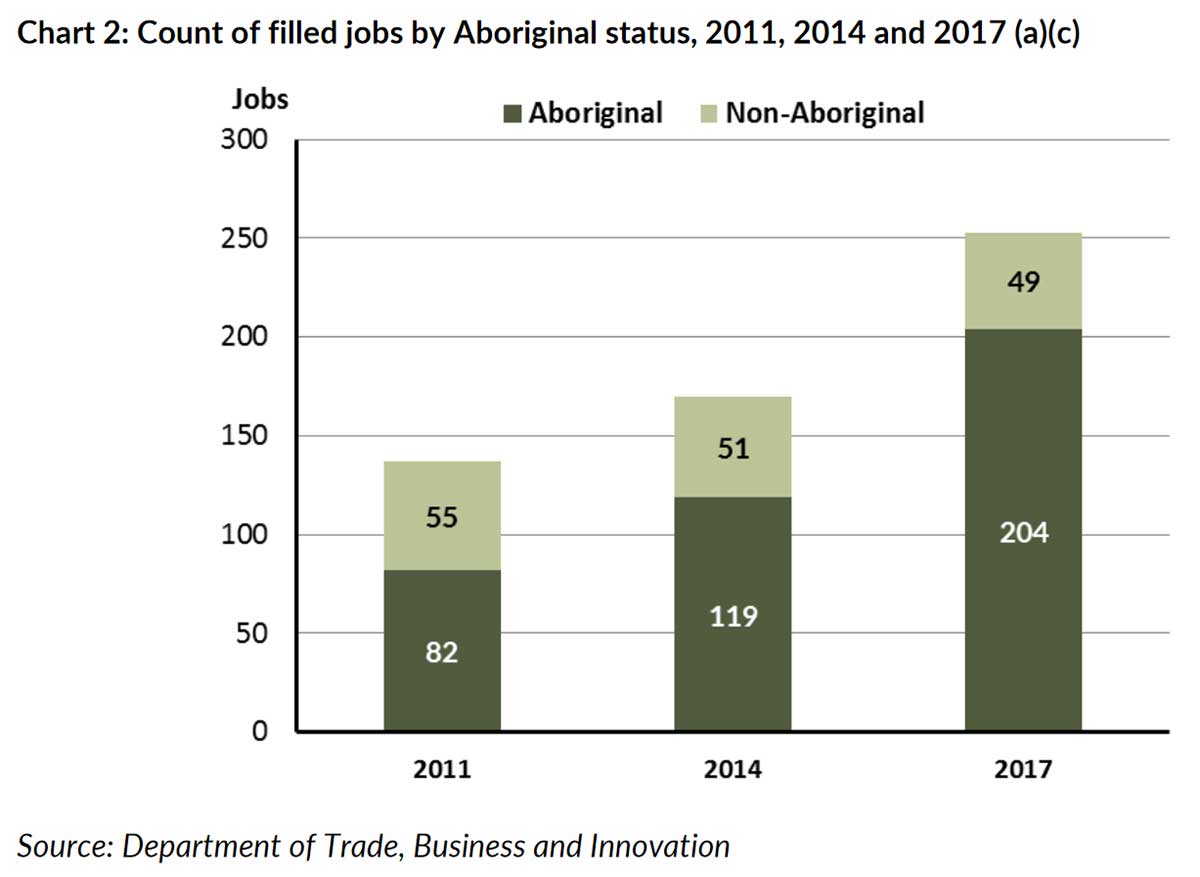 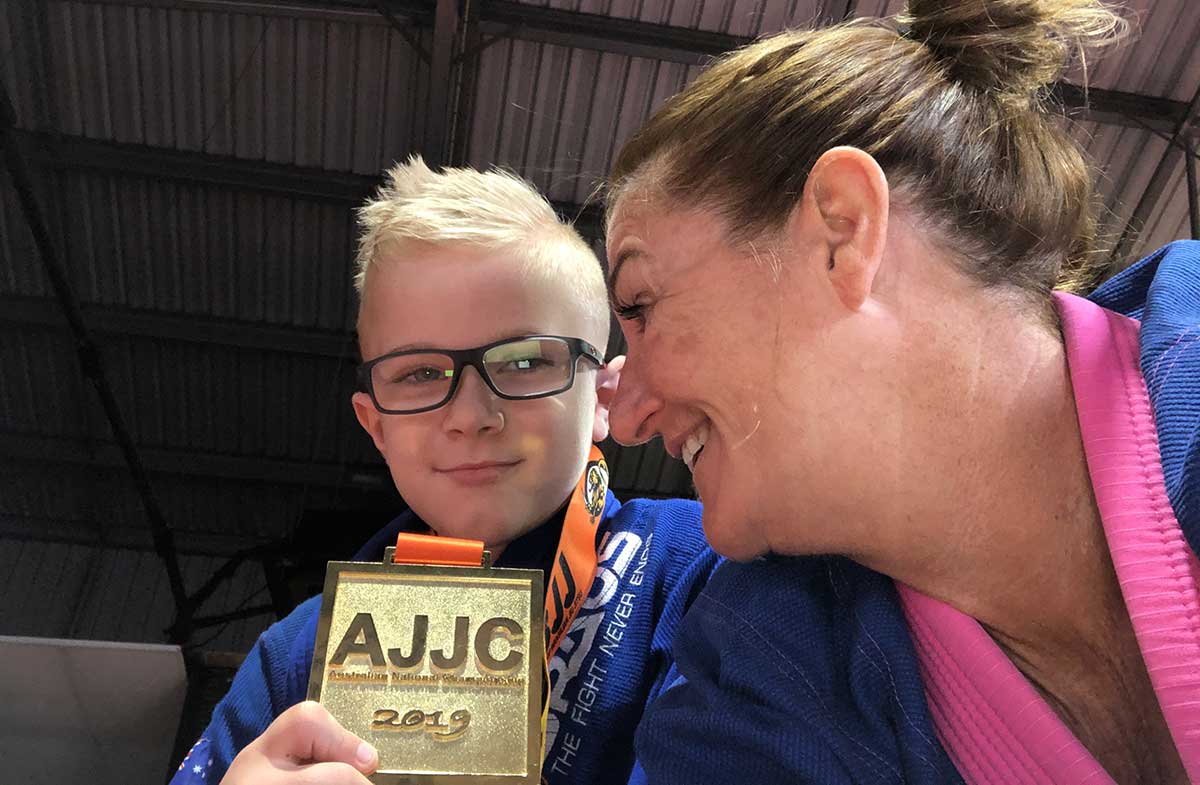 Caption: Jax and Queenie celebrate the boy’s victory at the national championships.

Jax Gardiner is an extraordinary example of how something as seemingly mundane as a business development grant can help change people’s for the better - for all time.

The seven-year-old boy, who has been clinically diagnosed as being vision impaired in both eyes and severely suffering in self‑confidence, was being bullied at school.

So he signed up with the Jiu‑Jitsu Studio at Yarrawonga on the outskirts of Darwin.

“We’re incredibly proud of him,” says Queenie Warhurst, who owns the Jiu‑Jitsu Studio with Warwick Drew.

The studio, which offers self‑defence and martial arts training to all, returned from the Australian Jiu‑Jitsu championships this year with 20 national medals and has five national champions on its books.

It works with Aboriginal girls through the Stars program and Palmerston Girls Academy.

Students also include children who suffer disorders such as Asperger syndrome, sensory processing problems and autism.

The studio is able to offer a wide range of training partly thanks to help from the Northern Territory Government through the Aboriginal Business Development Program.

Government grants paid for lighting, fans, shade and IT equipment.

“We just couldn’t have done the work without the government’s help,” says Queenie, who is a black belt in judo.

The studio gained invaluable support from one of the government‘s Small Business Champions, Robyn Secrett.

“That woman is bloody amazing,” says Queenie. “She navigated us through the whole development process.

“Robyn came to the studio, learned what we were all about, shared our vision and set about helping us.

“We are so impressed with her.”

To learn more about the Territory Government’s strategic programs and activities to support local businesses and industry, including getting in touch with a small business champion, go to the start.run.grow. website.

Riding for the Disabled

A not-for-profit organisation that employs horse riding to help people in need is back in the saddle thanks to the Northern Territory Government.

Riding for the Disabled in the Top End was in disarray last year and at one time was forced to close.

“Everything was run down and governance was very poor,” says newly‑elected president Debbie Holland.

The organisation, which has eight horses on eight hectares at Marlows Lagoon in Palmerston, went to the Department of Trade, Business and Innovation for help.

One of the Territory Government’s Small Business Champions, Robyn Secrett, was put on the case.

“She was fantastic,” says Debbie. “She guided us through the whole process of applying for a grant.”

Riding for the Disabled was awarded a grant through the start.run.grow. program and used the money to bring in a business consultant.

“The consultant improved things immensely by developing a proper management plan,” says Debbie. “Governance was a key issue for us, so the consultant ran training sessions so that everybody on the committee understood their roles and responsibilities.

“We would never have been able to afford the consultant without the government’s help.”

Riding for the Disabled helps children and adults with a range of disabilities, plus veterans suffering from post-traumatic stress.

It also has a group of able‑bodied children.

Riding for the Disabled hopes to expand its services soon by developing a full program for veterans and people suffering from dementia.

Debbie says studies have shown that horse riding is enormously therapeutic for all people.

“It calms down people, improves self‑control and is physically beneficial.”

To get in touch with a Small Business Champion, go to the start.run.grow. website. 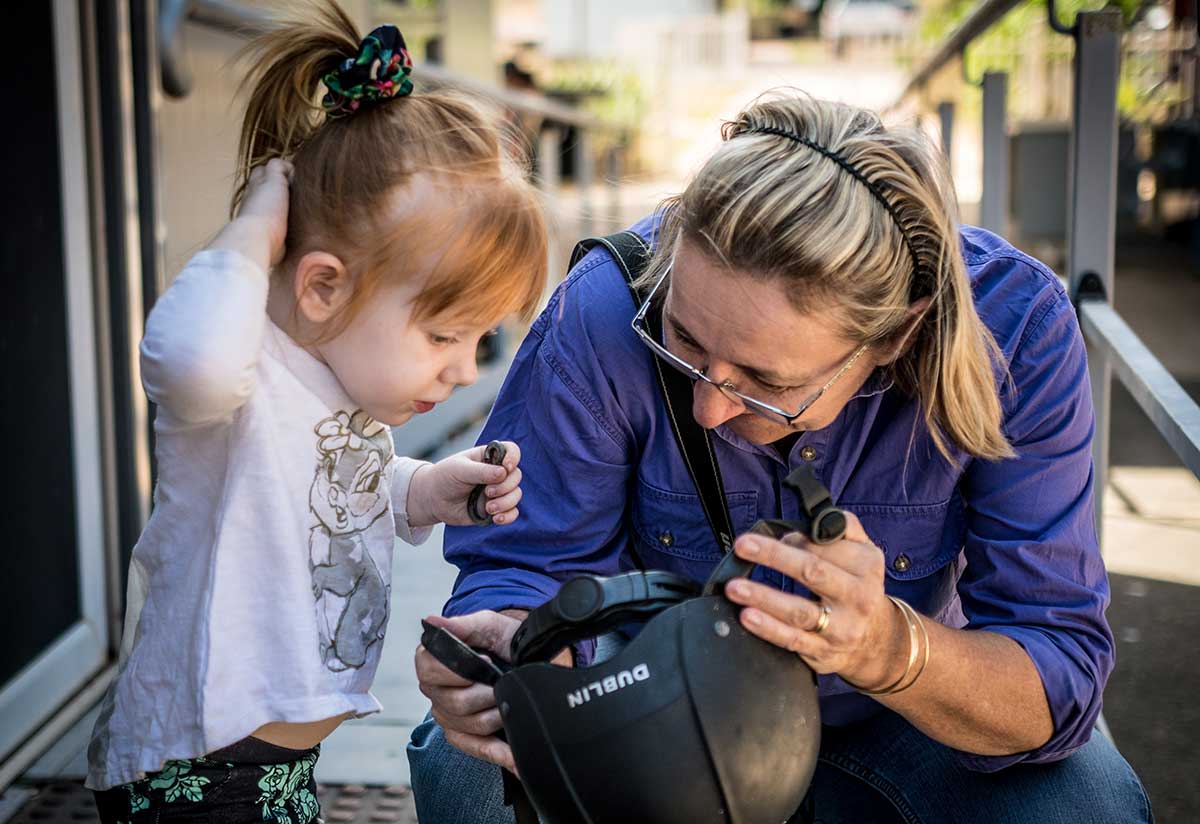 Reaching South to the Territory 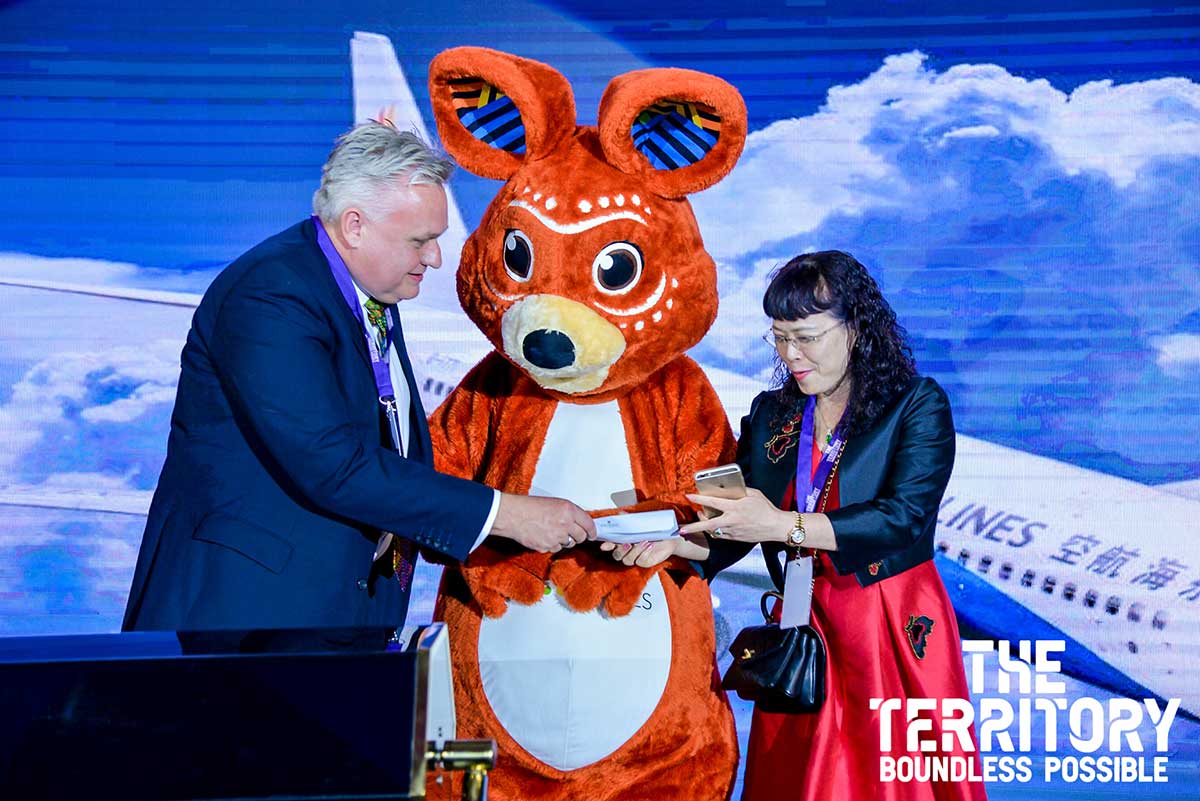 The Territory’s Reaching South team are back from a successful trade mission in Shenzhen, China last week.

With more than 350 participants, including over 100 Territorians, there was a busy and comprehensive program of engagement with potential investors.

NT Airports were amongst one of the Territory businesses involved in the event and found the experience to be incredibly worthwhile in forming relationships.

“From the perspective of working for Darwin Airport, I personally made some crucial contacts within Donghai itself,” says NT Airports Deputy Chief Executive and Chief Financial Officer, Thomas Ganley. <"> The 2019 event builds on the highly successful 2018 delegation to deliver detailed investment, trade and business opportunities to Chinese companies and industry representatives based in the Greater Bay Area of southern China.

Direct flights between Darwin and Shenzhen has seen increased regional engagement, which the Territory Government is committed to strengthening into the future.

“Reaching South, from my perspective, is an integral part of aviation development not only directly relating to the existing Donghai non‑stop service between Shenzhen and Darwin, but also for future development between our region and the Greater Bay area which includes Guangzhou and Hong Kong,” says Shane.

“Broadly speaking, there are five main reasons for travel - holiday, visiting friends and relatives, business, education and employment. Stakeholders involved in the current Donghai service are mutually invested in each of these.”

With the purpose of strengthening the Territory’s profile in Shenzhen, Reaching South is an example of how international delegations provide the opportunity to strengthen and cement relationships that would not have occurred otherwise.