History of space in the Territory 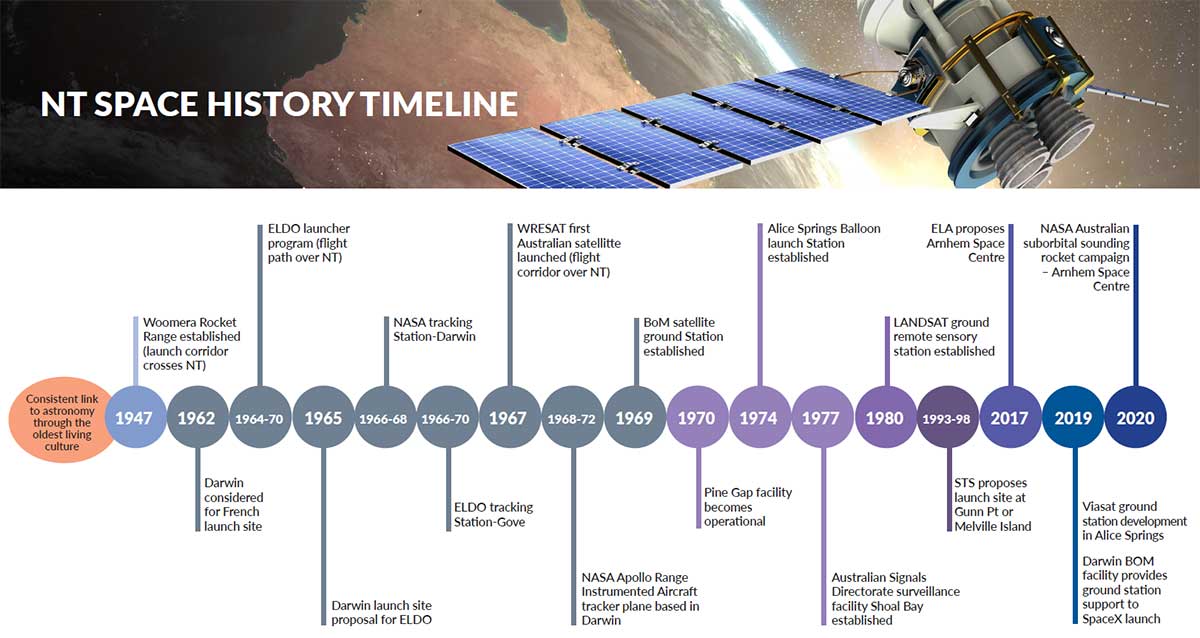 The Territory has been involved in Australia’s ‘modern’ space activity for nearly 60 years, with Aboriginal Traditional Owners practicing astronomy for more than 60,000 years. To find out more about this incredible history explore the timeline below.

The northern boundary of the range’s north-western missile test flight corridor crosses the south western corner of the Northern Territory (NT). This flight path will be used in 1964-65 for the European Launcher Development Organisation's (ELDO) ‘Blue Streak’ flight tests.

Established for missile testing (not space launch), Woomera is located too far south of the equator to be a viable site for launching satellites to equatorial orbit.

In 1965, ELDO also considers a site near Darwin as the location for its new equatorial launch site.

Both proposals are highly rated but come in second, partly for political reasons, to Kourou (French Guiana), which will go on to become the launch facility for the European Space Agency.

The ELDO (a consortium of the United Kingdom (UK), France, West Germany, Italy, Belgium, The Netherlands and Australia) uses the Woomera Rocket Range as its launch site for development test flights of the Europa 1 satellite launch vehicle.

In 1964-65, the British ‘Blue Streak’ first stage is tested with three flights along the north-western missile corridor (overflying south-west NT).

From 1966, progressive test flights of the entire Europa 1 vehicle, including satellite launch attempts, are fired along a northern satellite launch corridor, which overflies the NT. During these flights, the first stage of the rocket impacts in the NT, at the north of the Simpson Desert. The second stage impacts in the sea beyond Papua New Guinea.

There are 10 ELDO launches from Woomera, but none successfully launches a satellite (see ELDO launch summary below). To protect local inhabitants, ‘rocket shelters’ are constructed at station homesteads and other locations overflown by the Europa vehicles. These are very similar in design to shelters constructed for South Australian properties beneath the planned flightpaths in the 1950s.

On 7 June 1966 it supports the orbital insertion of Orbiting Geophysical Observatory (OGO)-3 into a very eccentric orbit. At the time OGO-3 was the largest experimental satellite placed in orbit.

After the OGO mission, a small team from NASA’s Cooby Creek tracking station (located near Toowoomba, Queensland) uses the Darwin station to support experiments with the Application Technology Satellite program until 1968.

The Down Range Guidance and Tracking Station is designed to track and control the third stage of the rocket as it is positioned for inserting the satellite into orbit.

The satellite is Australian built, but the launcher is provided by the United States (US).

WRESAT uses the northern satellite launch corridor and its first stage falls into the Simpson Desert close to the Queensland border.

The Australian Government rejected proposals for a follow program of WRESAT satellites.

A NASA Apollo Range Instrumented Aircraft (ARIA) is based in Darwin during Apollo missions.

During the Apollo program, they provide coverage for Trans Lunar Injection and spacecraft splashdown and recovery.

The Bureau of Meteorology establishes a ground station in Darwin to receive regular weather images from NASA’s Nimbus weather satellites.

A signals intelligence station managed jointly by the Central Intelligence Agency, the US National Security Agency and the US National Reconnaissance Office, during the Cold War, Pine Gap played an essential role in the verification of some major arms control agreements.

In the post-Cold War era, Pine Gap is a key component of the ECHELON global surveillance network, a Sigint surveillance program operated by the Five Eyes intelligence alliance (US, Australia, Canada, New Zealand and the UK).

Black Arrow R3 launches the British Prospero satellite on 28 October 1971. It is only the second satellite (to date) to be launched from Woomera.

Britain cancelled the Black Arrow project after Prospero and gave up its own launch capability.

In 1980 it becomes Australia’s major balloon launching facility and remains in operation today under the management of Australian Defence Force Academy (ADFA) and the University of NSW Canberra.

A Landsat satellite ground station is established at Alice Springs to provide Australia direct access to data from the US Landsat series of remote sensing satellites.

Australia is one of the first countries outside the US to establish such a station.

Part of the Australian Centre for Remote Sensing in the 1980s and 1990s, the centre is now operated by Geoscience Australia for the Near-Earth Observation Group and has been upgraded to receive data from a wide range of satellites.

Following an unsuccessful attempt to develop an equatorial launch facility at Cape York in Queensland, Space Transportation Systems Ltd (STS) switches its attention to the NT.

From 1993 to 1998 it investigates establishing a commercial spaceport using Russian Proton rockets as the launch vehicle.

STS considers launching from Melville Island or Gunn Point, near Darwin, but finally withdraws from attempts to develop a spaceport when it is unable to secure supplies of the Proton launcher.

Arnhem Space Centre will be located just outside of the town of Nhulunbuy in the Territory’s East Arnhem Land, and will be developed in partnership with the Gumatj Corporation (owned by one of East Arnhem’s Aboriginal Traditional Owner groups).

SpaceX launches its Falcon Heavy rocket carrying COSMIC-2: six satellites with the purpose of improving weather forecasts and space weather monitoring. Australia’s Bureau of Meteorology is a mission partner, and its Darwin facility, the Middle Point ground station, fulfils a crucial support role in sending command and control information to the satellite.

URL copied!
Back to top
URL: https://industry.nt.gov.au/industries/developing-industries/space-industry/history-of-space-in-the-territory 27 May 2022, 10:13 pm