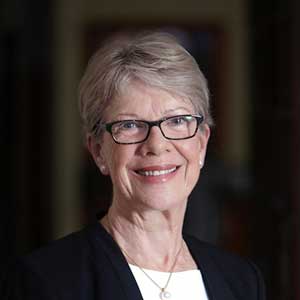 Clare became the first Labor Chief Minister of the Northern Territory (NT) when her party won power in 2001. Over the next six years, Clare held a number of portfolios - Treasury, Major Projects, Indigenous Policy and Arts and Museums. Significant achievements over those years were increasing jobs and growth in our economy; expanding secondary education to our Aboriginal communities; completing the Alice to Darwin railway; persuading Inpex to consider Darwin for its LNG plant and reinventing the Darwin Festival.

For the best part of two decades before then, Clare was an ABC journalist and broadcaster, working in Sydney, Canberra and Darwin - radio and TV.

Since leaving politics, Clare spent two years as the chief executive officer of ACOSS; another two as a professorial fellow at Charles Darwin University and is now either chair or director of a number of organisations in the NT - MAGNT, NT Cricket, Browns Mart Arts, the Mental Health and Suicide Prevention Regional Planning Group, and Team Territory.

In 2020, Clare chaired the Northern Territory IET Rebound Taskforce, established to provide advice and recommendations to ensure the ongoing sustainability and continued growth of the IET sector in response to COVID-19. A key outcome of the taskforce was gaining the approval of the Australian and NT governments for the pilot arrival of international students in November 2020.

Clare’s partner David Alderman is a barrister at William Forster Chambers and she has two adult children.

URL copied!
Back to top
URL: https://industry.nt.gov.au/boards-and-committees/northern-territory-international-education-and-training-industry-group/clare-martin 29 June 2022, 12:39 am